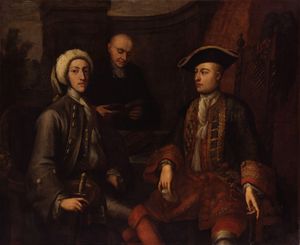 He was the son of Pieter Hermansz Verelst and brother to Herman and Simon. Due to the slanting S of Simon in his signatures, flower still lifes in the manner of Simon Verelst are sometimes attributed to Johannes, while some of Johannes' portraits are attributed to Simon.[1]

To seal a treaty with the British, four Iroquois delegates (called "Indian kings" by the British) visited London. Queen Anne was so impressed by these tall muscular foreign visitors that she had Verelst paint oilcolor of them in 1710 (see Four Mohawk Kings). This was one of the first paintings of aboriginal people. The chiefs came voluntarily and were well treated and entertained. They were Tee Yee Neen Ho Ga Row (Hendriks), Emperor of the Six Nations; Ho Nee Yeath Taw No Row (John), King of Generethgarich; Sa Ga Yeath Qua Pieth Tow (Brant) of the Maquais — he was the grandfather of Joseph Brant after whom Brantford, Ontario is named; and Etow Oh Koam (Nicholas), King of the River Nation. They had been persuaded to come to England by Peter Schuyler, acting Governor of New York in 1709 and some-time mayor of Albany. They stayed only one month and were able to return without contracting any European diseases. They were three Mohawks and a Mahican.[2]

The four portraits, now in the Library and Archives Canada, were featured on a Canadian postage stamp in 2010.[3]