John Webster (c. 1580 – c. 1634) was an English Jacobean dramatist best known for his tragedies The White Devil and The Duchess of Malfi, which are often regarded as masterpieces of the early 17th-century English stage.[1] His life and career overlapped William Shakespeare's.

Webster's life is obscure, and his date-of-birth and death date are not known. His father, a carriage maker also named John Webster, married a blacksmith's daughter named Elizabeth Coates on 4 November 1577, and it is likely that Webster was born not long after in or near London. The family lived in St. Sepulchre's parish. Father John, and Uncle, Edward Webster, were Freemen of the Merchant Taylors' Company and Webster attended Merchant Taylors' School in Suffolk Lane, London.[2] On 1 August 1598, "John Webster, lately of the New Inn" was admitted to the Middle Temple, one of the Inns of Court; in view of the legal interests evident in his dramatic work, this is possibly the playwright.[3] Webster married the 17-year-old Sara Peniall on 18 March 1606 at St Mary's Church, Islington.[4] A special licence had to be obtained to permit a wedding in Lent, which was necessary as at the date of their marriage, Sara was seven months pregnant. Their first child, John, was baptised at the parish of St Dunstan-in-the-West on 8 March 1605 or 1606. Bequests in the will of a neighbour who died in 1617, indicate that other children were born to him.

Most of what is otherwise known of him relates to his theatrical activities. Webster was still writing plays as late as the mid-1620s, but Thomas Heywood's Hierarchie of the Blessed Angels (licensed 7 November 1634) speaks of him in the past tense, implying he was then dead.

By 1602, Webster was working with teams of playwrights on history plays, most of which were never printed. These included a tragedy Caesar's Fall (written with Michael Drayton, Thomas Dekker, Thomas Middleton and Anthony Munday), and a collaboration with Thomas Dekker Christmas Comes but Once a Year (1602).[5] With Dekker he also wrote Sir Thomas Wyatt, which was printed in 1607, and probably first performed in 1602. He worked with Thomas Dekker again on two city comedies, Westward Ho in 1604 and Northward Ho in 1605. Also in 1604, he adapted John Marston's The Malcontent for staging by the King's Men. 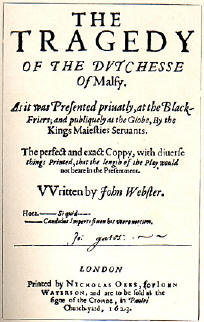 Title page of The Duchess of Malfi, 1623

Despite his ability to write comedy, Webster is best known for his two brooding English tragedies based on Italian sources. The White Devil, a retelling of the intrigues involving Vittoria Accoramboni, an Italian woman assassinated at the age of 28, was a failure when staged at the Red Bull Theatre in 1612 (published the same year), being too unusual and intellectual for its audience. The Duchess of Malfi, first performed by the King's Men about 1614 and published nine years later, was more successful. He also wrote a play called Guise, based on French history, of which little else is known as no text has survived.[5]

The White Devil was performed in the Red Bull Theatre, an open-air theatre that is believed to have specialised in providing simple, escapist drama for a largely working class audience, a factor that might explain why Webster's highly intellectual and complex play was unpopular with its audience. In contrast, The Duchess of Malfi was probably performed by the King's Men in the smaller, indoor Blackfriars Theatre, where it would have played to a better educated audience that might have appreciated it better. The two plays would thus have been very different in their original performances. The White Devil would have been performed, probably in one continuous action, by adult actors, with elaborate stage effects a possibility. The Duchess of Malfi was performed in a controlled environment, with artificial lighting, and musical interludes between acts, which allowed time, perhaps, for the audience to accept the otherwise strange rapidity with which the Duchess is able to have babies.

Webster wrote one more play on his own: The Devil's Law Case (c. 1617–1619), a tragicomedy. His later plays were collaborative city comedies: Anything for a Quiet Life (c. 1621), co-written with Thomas Middleton, and A Cure for a Cuckold (c. 1624), co-written with William Rowley. In 1624, he also co-wrote a topical play about a recent scandal, Keep the Widow Waking (with John Ford, Rowley and Dekker).[5] The play itself is lost, although its plot is known from a court case. He is believed to have contributed to the tragicomedy The Fair Maid of the Inn with John Fletcher, Ford, and Phillip Massinger. His Appius and Virginia, probably written with Thomas Heywood, is of uncertain date.

Webster's major plays, The White Devil and The Duchess of Malfi, are macabre, disturbing works that seem to prefigure the Gothic literature of the late eighteenth and early nineteenth centuries.[citation needed] Intricate, complex, subtle and learned, they are difficult but rewarding, and are still frequently staged today.

Webster has received a reputation for being the Elizabethan and Jacobean dramatist with the most unsparingly dark vision of human nature. Even more than John Ford, whose 'Tis Pity She's a Whore is also very bleak, Webster's tragedies present a horrific vision of mankind. In his poem "Whispers of Immortality," T. S. Eliot memorably says that Webster always saw "the skull beneath the skin".

On the other hand, Webster's title character in The Duchess of Malfi is presented as a figure of virtue by comparison to her malevolent brothers, and in facing death she exemplifies classical Stoic courage. Her martyr-like death scene has been compared to that of the titular king in Christopher Marlowe's play Edward II. Webster's use of a strong, virtuous woman as his central character was rare for his time and represents a deliberate reworking of some of the original historical event on which his play was based. The character of the duchess recalls the Victorian poet and essayist Algernon Charles Swinburne's comment in A Study of Shakespeare that in tragedies such as King Lear Shakespeare had shown such a bleak world as a foil or backdrop for virtuous heroines such as Ophelia and Imogen, so that their characterization would not seem too incredible. Swinburne describes such heroines as shining in the darkness.[citation needed]

While Webster's drama was generally dismissed in the eighteenth and nineteenth centuries, many twentieth century critics and theatregoers found The White Devil and The Duchess of Malfi to be brilliant plays of great poetic quality and dark themes. One explanation for this change is that only after the horrors of war in the early twentieth century could their desperate protagonists be portrayed on stage again, and understood. W. A. Edwards wrote of Webster's plays in Scrutiny II (1933–4): "Events are not within control, nor are our human desires; let's snatch what comes and clutch it, fight our way out of tight corners, and meet the end without squealing." The violence and pessimism of Webster's tragedies have seemed to some analysts close to modern sensibilities.[6]

Webster in other works