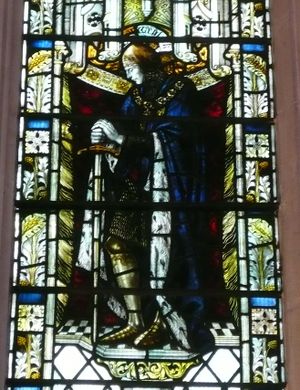 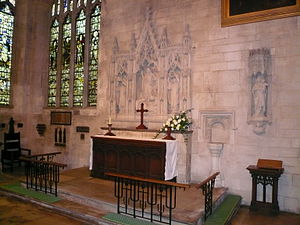 John Wenlock, 1st Baron Wenlock KG (c.1400-04 - 1471) was an English diplomat, soldier, courtier and politician. He fought on the sides of both the Yorkists and the Lancastrians in the Wars of the Roses. He has been called "the prince of turncoats",[1] although some historians suggest the label may not be fair.[2] Others contend that even when Wenlock was not actually changing sides, he was engaged in "fence sitting par excellence."[1]

Although Wenlock is often remembered for his military exploits (he fought in six of the major battles of the Wars of the Roses, as well as the sieges of the Tower of London and Dunstanburgh Castle), most of his public service was in the diplomatic field, and contemporary accounts record him as being regarded as "very clever".[1]

He was the son of William Wynell de Wenlock, commonly called William Wenlock, knight of the shire for Bedfordshire in 1404, by his wife Margaret Breton, an heiress of Houghton Conquest in Bedfordshire.

John Wenlock took part in the invasion of France under Henry V of England, and on 16 August 1421 he received a grant of lands in the bailiwick of Gisors in Normandy, and shortly after, in April 1422, is styled constable of Vernon. In 1433 he was returned to parliament for Bedfordshire, and again in 1436, 1447, 1449, and 1455. He was elected Speaker of the House in the 1455 Parliament. He was escheator for Buckinghamshire and Bedfordshire in 1438–9, and he early entered the service of Margaret of Anjou, being first usher of the chamber, and about 1450 chamberlain to her. In this capacity he laid the first stone of Queens' College, Cambridge, on 15 April 1448.[3]

He served also in 1444 as High Sheriff of Bedfordshire and Buckinghamshire. Wenlock's seat was at Luton, his property there, Someries Castle, coming through inheritance. In 1462 he acquired Hertfordshire property forfeited by the former Chief Justice, Sir John Fortescue.

His service to the Crown is also reflected in his employment as a member of some 18 embassies in the 1440s and 1450s. He was knighted in 1449. It appears to have been at one such embassy that he came into contact with the Duke of York and the Earl of Warwick (the "kingmaker"), and he became a supporter of the latter.

In the Wars of the Roses

Having successfully besieged the Tower of London for Edward of York, he was part of the latter's triumphal entry into London in 1461 and was elected a knight of the Garter a few days after. Later in the year he received appointment as Chief Butler of England and was made Baron Wenlock. In 1464 he helped Lord Hastings capture Dunstanburgh Castle.[3] 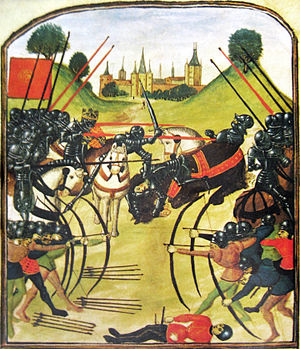 Image of the Battle of Tewkesbury, where Wenlock was killed, in a Ghent manuscript.

He continued to undertake diplomatic missions for Edward IV, and had command of Calais for him (possibly as deputy of Warwick). When Warwick defected to the Lancastrian camp, Wenlock did not immediately follow him back, however his sympathies clearly remained with his friend, and by 1471 he too had switched sides, accompanying Margaret of Anjou back to England.

At the Battle of Tewkesbury on 4 May 1471, he commanded the middle of the Lancastrian line. However, the Lancastrians suffered a crushing defeat, and Wenlock died on the battlefield. He was allegedly killed by his own commander, the Duke of Somerset, who blamed Wenlock's indecisiveness for the defeat.[4] The Duke of Somerset had led the right flank of the Lancastrian line forward, and expected Wenlock to support him, but Wenlock held back (some suggest deliberately) and the Duke's men were slaughtered. After the Duke's flank retreated he either summoned Wenlock or rode to him, and supposedly killed him with a single blow to the head.[5] Some sources suggest that Wenlock was committed to the cause, but that Somerset had bungled the planned manoeuvre, coming out of the woods too early, and emerging in front of the enemy instead of behind, thereby preventing Wenlock's men from firing upon them.[2]

It has been argued that Wenlock did not actually die on the field at Tewkesbury, but together with his second wife, Agnes (widow of Sir John Fray), perpetuated a hoax by burying another body, and he then lived on for several more years.[6] The suggestion seems to be largely predicated on the absence of any record of his burial either at Tewkesbury or at the family chapel in Luton.[7] However, it would be difficult for a highly public figure such as Wenlock to have survived for so long unnoticed.[7] Further, Agnes remarried (for the third time) at some point between September 1473 and October 1474 - not long after Tewkesbury - to Sir John Say, which also casts doubt on the assertion that Wenlock survived long after Tewkesbury.[8] Further, Wenlock was already at least 67 years old at Tewkesbury, and so living another ten years, whilst not impossible, would certainly have made him very venerable indeed for the fifteenth century.

Wenlock married twice in his life. His first wife, Elizabeth Drayton (who was the widow of Christopher Preston) died in the early 1460s after being married to him for over 30 years. In 1467 Wenlock then remarried Agnes Danvers (herself a widow, her maiden name was Agnes Say). At the time of this second marriage both spouses would have been in their 60s.[8]

Wenlock died without issue, and his title died with him.