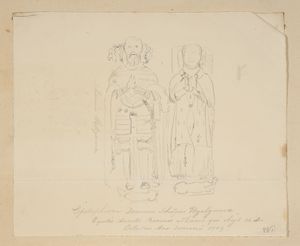 Lord Williams died at Ludlow Castle on 14 October 1559. His body having been returned to Rycote in preparation for a funeral held in Thame Church on 15 November, he was buried in this tomb.

John Williams, 1st Baron Williams of Thame (c.1500 – 14 October 1559) was Treasurer of the King's Jewels, Lord Chamberlain of England (1553–1557) and Lord President of the Council of the Welsh Marches. He was summoned to parliament as Lord Williams of Thame on 17 February 1554.

Williams was the son of Sir John Williams of Burghfield in Berkshire and his wife, Elizabeth, the daughter and eventual heiress of Richard Moore also of Burghfield and of Preston Candover in Hampshire.

As Treasurer of the King's Jewels, Williams was heavily involved in the Dissolution of the Monasteries, during which he obtained Thame Abbey and its lands. He also had a palace at Rycote which Henry VIII and Catherine Howard visited on their honeymoon. Later, he rose in favour with Queen Mary for having declared for her party so early. Her sister, Elizabeth I, liked him because he had been kind to her during her imprisonment. He served as High Sheriff of Berkshire and Oxfordshire for 1538.

Williams gave his name to Thame School, Thame, Oxfordshire, also known as Lord Williams's School, Thame. He bequeathed a sum of money to create an establishment of learning for all comers. The school was founded in 1559. The school has been a grammar school and is now a comprehensive school. The boarding element to the school closed in 1990.

Williams married firstly, by July 1524, Elizabeth (c.1504 – 25 October 1556), daughter & coheiress of Thomas Bledlow of Bledlow in Buckinghamshire, grandson of Thomas Bledlow and Elizabeth Starky, daughter of Sir Humphrey Starkey, Chief Baron of the Exchequer.[1] Elizabeth Bledlow was the widow of Andrew Edmonds (d. 23 June 1523)[2] of Cressing, Essex, by whom she had a son, Sir Christopher Edmonds (d.1596), and a daughter, Ursula Edmonds.[3] By Elizabeth Bledlow, Williams had three sons, John, Henry and Francis, and two daughters, Isabel, who married Sir Richard Wenman, and Margery, who married Henry Norreys, 1st Baron Norris of Rycote.[4]

Williams' three sons predeceased him, and the barony became extinct at his death on 14 October 1559.[6] His elder daughter, Isabel, inherited Thame, and his younger daughter, Margery, inherited Rycote.[7]