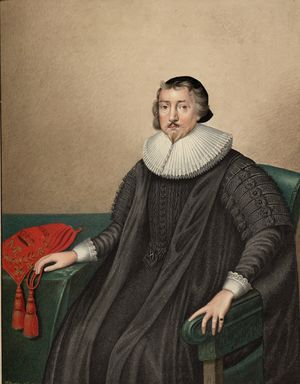 18th century copy of a portrait of Archbishop John Williams 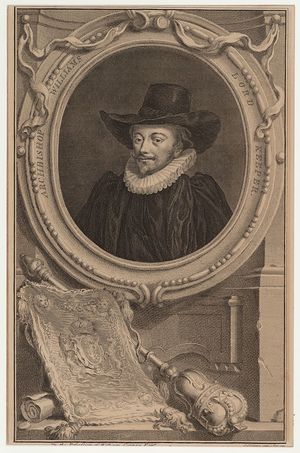 John Williams, Bishop of Lincoln, and later Archbishop of York, was born in Conwy, Wales, second son of Edmund and Mary Williams.[1] At a time when many bishops came from rather humble backgrounds, Williams prided himself on belonging to an "ancient family". He attended Ruthin School before graduating from St John's College, Cambridge BA 1601, MA 1605, BD 1613, and DD 1616.[2] He became a fellow in 1603 and was a University Proctor in 1611-12. He entered the clergy and he first impressed the king by a sermon in 1610. He became the king's chaplain in 1617.

In 1620 he was made Dean of Westminster and was swiftly elevated by King James I to the Bishopric of Lincoln in 1621, as well as being made Lord Keeper (also known as Lord Chancellor). Throughout his political career Williams was identified as a strong supporter of King James, who, it has been said, valued him as a man "who knew his mind and would do his bidding"[3] and with whom personally he had much in common. He alienated the Prince of Wales, the future Charles I by disapproving of his ill-fated expedition with the Duke of Buckingham to Madrid. When James I died and was succeeded by Charles I in 1625, Williams was quickly removed from the office of Lord Chancellor, and was prevented from attending Parliament. Though Williams managed to survive Buckingham, who was assassinated in 1628, he remained out of favour; he incurred the enmity of William Laud, Archbishop of Canterbury from 1633 and his powerful ally Thomas Wentworth, 1st Earl of Strafford, both of whom had great influence with Charles I.

Williams's liberal attitudes toward the Puritans led to a legal battle with the Court of the Star Chamber. Laud's biographer refers to the original charge against him, of revealing State secrets, as frivolous;[4] but Williams, in his efforts to clear himself, laid himself open to a charge of subornation of perjury, which was proved, and he was suspended from his benefices in 1636, fined, and imprisoned in the Tower of London until 1640.[5] Laud had assumed that the conviction would force Williams' resignation as Bishop of Lincoln; to his fury Williams refused to resign and no machinery existed to remove him.[6] Until his imprisonment, Williams remained defiantly at his episcopal palace, Buckden, lavishing hospitality on his neighbours.

In 1640 the Lords forced the King to release him, and Rt.Rev. Williams resumed his offices and tried to steer a course between the extreme wings of the Church. He showed little pity for either Laud or Strafford, supporting the impeachment of both men. In the case of Laud there is no evidence that he approved of Laud's eventual execution; but it was otherwise with Strafford. He fatally weakened Strafford's cause in the House of Lords by arguing successfully that bishops should absent themselves in cases involving the death penalty,[7] and later specifically urged the King not to spare Strafford's life, arguing that in his public role he was discharged from his private promise to that effect.[8] He was re-imprisoned by Parliament in 1641, but was released on bail in 1642 and went to be with the King in Yorkshire, as well as be enthroned as Archbishop of York, a position to which he had been appointed the previous year. His stay in Yorkshire was brief, however, and he spent the last years of his life in his native north Wales, initially supporting the royalist cause, but eventually coming to an accommodation with the local parliamentarian commander in 1646.

Archbishop Williams died of quinsy in 1650 whilst staying with his kinsfolk, the Wynns of Gwydir, and was buried at the parish church of Llandygai. He had repurchased the family estate, which passed to his nephew Sir Griffith Williams. Through his niece Elizabeth Dolben he was the grand-uncle of a later Archbishop of York, John Dolben.