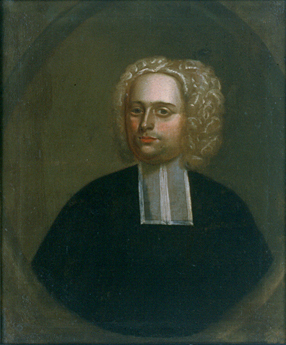 Portrait believed to be of John Williams, c. 1707

John Williams (10 December 1664 – 12 June 1729) was a New England Puritan minister who became famous for The Redeemed Captive, his account of his captivity by the Mohawk after the Deerfield Massacre during Queen Anne's War. He was an uncle of the notable pastor and theologian Jonathan Edwards.
His first wife Eunice Mather was a niece of Rev Increase Mather and a cousin of Rev. Cotton Mather and was related to Rev. John Cotton.

John Williams was born in Roxbury, Massachusetts Bay Colony in 1664. Son of Samuel Williams (1632–98) and Theoda Park (1637–1718). His grandfather Robert had immigrated there from England about 1638. John had local schooling. Later he attended Harvard College, where he graduated in 1683.

Williams was ordained to the ministry in 1688, and settled as the first pastor in Deerfield. The frontier town in western Massachusetts was vulnerable to the attacks of the Native Americans and their French allies from Canada. The local Pocumtuc resisted the colonists' encroachment on their hunting grounds and agricultural land. In the early 18th century, French and English national competition resulted in frequent raids between New England and Canada, with each colonial power allying with various Native American tribes to enlarge their fighting forces.

In 1702, with the outbreak of Queen Anne's War, New England colonists had taken prisoner a successful French pirate, Pierre Maisonnat dit Baptiste. To gain his return, the French governor of Canada planned to raid Deerfield, in alliance with the Mohawk of the Iroquois, Abenaki from northeast New England and the Pocumtuc. They intended to capture a prisoner of equal value to exchange. Raiding Deerfield, they captured Williams, prominent in the community, and more than 100 other English settlers.[1]

On the night of 28 February 1704, approximately 300 French and Indian soldiers took 109 citizens captive, besides killing a total of 56 men, women and children, including two of Williams' children (six-year-old son John Jr., and six-week-old daughter Jerushah) and his African slave Parthena. The raiding party led the Williams and other families on a march over 300 miles (480 km) of winter landscape to Canada. En route to Quebec, a Mohawk killed Williams' wife after she fell while trying to cross a creek, along with Frank, another African slave. Others of the most vulnerable older and youngest people died, some at the hands of Indians who judged them unable to go on. Williams remained steadfast and encouraged the other captives with prayer and Scripture along their journey to Quebec. The large party had seven weeks of hard overland travel to reach Fort Chambly.

While captive, Williams recorded his impressions of French colonial life in New France; Jesuit missionaries included him at their table for meals, and he was often given comfortable lodgings, including a feather bed. Upon Pierre Maisonnat's release from Boston, Williams was released by Quebec Governor Philippe de Rigaud Vaudreuil and returned to Boston on 21 November 1706, along with about 60 other captives. Among them were four of his children.

Williams was forced to leave in Quebec his daughter Eunice, then ten years old, who had been adopted by a Mohawk family in Kahnawake, a Jesuit mission village. She took the place of their child who had died from smallpox. Eunice became thoroughly assimilated, learning the Mohawk language and ways. Because the French colonial government depended on their alliance with the Mohawk, they would not take by force children whom the Indians had adopted. Eunice was baptized as a Catholic and took the name Marguerite in 1710. She was also given a Mohawk name as a child, and as an adult, was given the name Kanenstenhawi. At age 16, Kanenstenhawi married François-Xavier Arosen, a Mohawk man of 25. They had three children together.

Williams and his other four children returned to Deerfield. There he resumed his pastoral charge in the latter part of 1706 and lived there until his death in 1729. He made efforts to keep in touch with Eunice and continued to try to persuade her to return to Massachusetts, as did her brother.

Williams was a minister of the favored New England Puritans in the same era as Samuel Willard, Increase Mather, Cotton Mather, Edward Taylor, and Solomon Stoddard. He died shortly before the rise of the Great Awakening.

He published several sermons, and a narrative of his captivity called The Redeemed Captive (Boston, 1707). Because of his standing in the colony, his account was one of the more well-known of the numerous Indian captivity narratives published during the colonial period. The 19th-century author James Fenimore Cooper drew on Williams' account as inspiration for his novel, The Last of the Mohicans.

Williams died in Deerfield in 1729. It was not until 1741 that Eunice and her husband went to Massachusetts for the first time, persuaded by her brother's efforts to keep in touch. She made two other visits, including an extended one with her children, but lived in Kahnawake for the rest of her life.[2]