John Wodehouse, 1st Earl of Kimberley KG PC DL (7 January 1826 – 8 April 1902), known as the Lord Wodehouse from 1846 to 1866, was a British Liberal politician. He held office in every Liberal administration from 1852 to 1895, notably as Secretary of State for the Colonies and as Foreign Secretary.

Kimberley was born in 1826 in Wymondham, Norfolk, the eldest son of the Hon. Henry Wodehouse (1799–1834) and grandson of John Wodehouse, 2nd Baron Wodehouse.[1] His mother was Anne Gurdon (d. 1880), daughter of Theophilus Thornhagh Gurdon. In 1846 he succeeded his grandfather as third Baron Wodehouse. He was educated at Eton and Christ Church, Oxford, where he took a first-class degree in classics in 1847.[1][2]

He was by inheritance a Liberal in politics, and in 1852–1856 and 1859–1861 he was Parliamentary Under-Secretary of State for Foreign Affairs in Lord Aberdeen's and Lord Palmerston's ministries. In the interval (1856–1858) he had been envoy-extraordinary to Russia; and in 1863 he was sent on a special mission to Copenhagen in the hope of finding a solution to the Schleswig-Holstein question. However, the mission was a failure.[1]

In 1864 Kimberley became Under-Secretary of State for India, but towards the end of the year was made Lord Lieutenant of Ireland. In that capacity he had to grapple with the first manifestations of Fenianism, and in recognition of his services he was created Earl of Kimberley in 1866. In July 1866 he vacated his office with the fall of Lord Russell's ministry, but in 1868 he became Lord Privy Seal in Gladstone's cabinet, and in July 1870 was transferred from that post to be Secretary of State for the Colonies. It was the moment of the great diamond discoveries in southern Africa, and the town of Kimberley in the Cape Colony was named after him.[1] 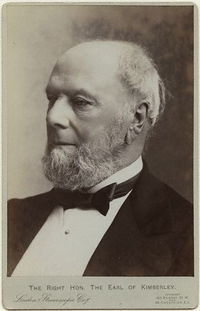 After an interval in opposition from 1874 to 1880, Lord Kimberley returned to the Colonial Office in Gladstone's next ministry. He was in that office when responsible government was granted to Cape Colony and British Columbia was added to the Dominion of Canada, and during the First Boer War. At the end of 1882 he exchanged this office first for that of Chancellor of the Duchy of Lancaster and then for the secretaryship of state for India, a post he retained during the remainder of Gladstone's tenure of power (1882–1885, 1886, 1892–1894), though in 1892–1894 he combined with it that of the lord presidency of the council.[1]

In Lord Rosebery's cabinet (1894–1895) he was Foreign Secretary. During this time he signed the landmark Anglo-Japanese Treaty of Commerce and Navigation. Sir Edward Grey who served as Parliamentary Under-Secretary under Kimberley at the Foreign Office portrays him unfavourably as prolix and prone to irrelevant digressions in conversation although concise, definite and clear on paper.[3] However, according to the Encyclopaedia Britannica Eleventh Edition, "As leader of the Liberal party in the House of Lords he acted with undeviating dignity; and in opposition he was a courteous antagonist and a critic of weight and experience".[4]

On 5 April 1850, he joined the Canterbury Association, formed to establish a colony (in the later Canterbury Region) on the South Island of New Zealand.[citation needed]

Lord Kimberley took interest in education, and after being for many years a member of the senate of the University of London, he became its chancellor in 1899.[1]

Lord Kimberley married Lady Florence FitzGibbon (d. 1895), daughter of Richard FitzGibbon, 3rd Earl of Clare, on 16 August 1847.[2] He died at 35 Lowndes Square in London on 8 April 1902,[2] aged 76, and was succeeded in his titles by his eldest son, John.[1] His second son, the Hon. Armine Wodehouse, was also a Liberal politician but died at an early age. His more distant relations include the writer P. G. Wodehouse.[citation needed]

The following places were named after the 1st Earl of Kimberley: