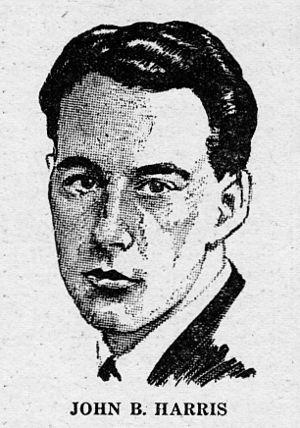 Wyndham/Harris as pictured in the May 1931 Wonder Stories 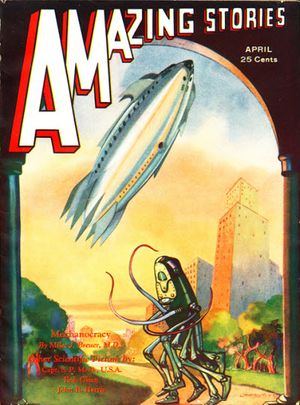 Wyndham's second story, "The Lost Machine", was cover-featured on the April 1932 issue of Amazing Stories, also under his Harris byline 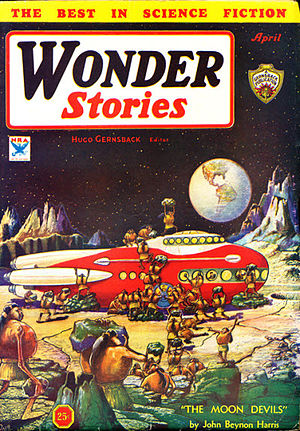 Wyndham's 1934 novelette "The Moon Devils" was the cover story for the April issue of Wonder Stories, also under the Harris byline 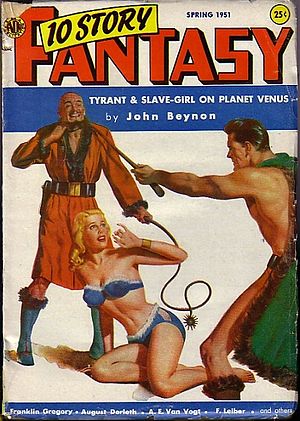 Wyndham's 1951 novelette "Tyrant and Slave-Girl on Planet Venus" was the cover story for the first and only issue of Ten Story Fantasy, under his "John Beynon" byline

John Wyndham Parkes Lucas Beynon Harris (/ˈwɪndəm/; 10 July 1903 – 11 March 1969)[2] was an English science fiction writer who usually used the pen name John Wyndham, although he also used other combinations of his names, such as John Beynon and Lucas Parkes. Many of his works were set in post-apocalyptic landscapes.

Wyndham was born in the village of Dorridge near Knowle in West Midlands, England, the son of George Beynon Harris, a barrister, and Gertrude Parkes, the daughter of a Birmingham ironmaster.[1]

His early childhood was spent in Edgbaston in Birmingham, but when he was 8 years old his parents separated and he and his brother, the writer Vivian Beynon Harris, spent the rest of their childhood at a number of English preparatory and public schools, including Blundell's School in Tiverton, Devon, during World War I. His longest and final stay was at Bedales School near Petersfield in Hampshire (1918–21), which he left at the age of 18, and where he blossomed and was happy.

After leaving school, Wyndham tried several careers, including farming, law, commercial art and advertising, but mostly relied on an allowance from his family. He eventually turned to writing for money in 1925 and, by 1931, was selling short stories and serial fiction to American science fiction magazines, most under the pen names of "John Beynon" or "John Beynon Harris", although he also wrote some detective stories.

During World War II, Wyndham first served as a censor in the Ministry of Information, then joined the British Army, serving as a Corporal cipher operator in the Royal Corps of Signals. He participated in the Normandy landings, although he was not involved in the first days of the operation.[1]

After the war, Wyndham returned to writing, inspired by the success of his brother, who had four novels published. He altered his writing style; and, by 1951, using the John Wyndham pen name for the first time, he wrote the novel The Day of the Triffids. His pre-war writing career was not mentioned in the book's publicity, and people were allowed to assume that it was a first novel from a previously unknown writer.

The book proved to be an enormous success and established Wyndham as an important exponent of science fiction. During his lifetime, he wrote and published six more novels under the name John Wyndham. In 1963, he married Grace Wilson, whom he had known for more than 20 years; the couple remained married until he died. He moved out of the Penn Club, London and lived near Petersfield, Hampshire, just outside the grounds of Bedales School.

He died in 1969, aged 65, at his home in Petersfield, survived by his wife and his brother.[3] Subsequently, some of his unsold work was published; and his earlier work was re-published. His archive was acquired by Liverpool University.[4]

Novels published in his lifetime as by John Wyndham

His reputation rests mainly on the first four of the novels published in his lifetime as by John Wyndham.[lower-alpha 1] The Day of the Triffids remains his best-known, but some of his readers consider that The Chrysalids was really his best.[5][6][7]

He also penned several short stories, ranging from hard science fiction to whimsical fantasy. A few have been filmed: Consider Her Ways, Random Quest, Dumb Martian, Jizzle (filmed as Maria) and Time to Rest (filmed as No Place Like Earth).[8] There is also a radio version of Survival.

Most of Wyndham's novels have a contemporary 1950s English middle-class setting. Brian Aldiss, another British science fiction writer, has disparagingly labelled some of them as "cosy catastrophes", especially his novel The Day of the Triffids.[9][page needed] The critic LJ Hurst dismissed Aldiss's accusations, pointing out that in Triffids the main character witnesses several murders, suicides, and misadventures, and is frequently in mortal danger himself.[10]