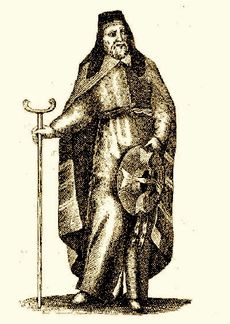 John XI Bekkos (also, commonly, Beccus; name sometimes also spelled Veccus, Vekkos, or Beccos) (c. 1225 – March 1297) was Patriarch of Constantinople from June 2, 1275 to December 26, 1282, and the chief Greek advocate, in Byzantine times, of the reunion of the Eastern Orthodox and Roman Catholic Churches.

John Bekkos was born in Nicaea among the exiles from Constantinople during the period of Latin occupation of that city, and died in prison in the fortress of St. Gregory near the entrance to the Gulf of Nicomedia.[1] Our knowledge of Bekkos’s life is derived from his own writings, from writings of Byzantine historians such as George Pachymeres[2] and Nicephorus Gregoras, from writings against him by Gregory of Cyprus and others, and from defences of him by supporters of ecclesiastical union like Constantine Meliteniotes and George Metochites. Bekkos’s history is closely bound up with the fortunes of the Union of the Churches declared at the Second Council of Lyon (1274), a union promoted by Pope Gregory X in the West and Emperor Michael VIII Palaeologus in the East. The union policy of Michael VIII was largely politically motivated,[3] and Bekkos at first opposed it; but, after Michael VIII had had him imprisoned in the Tower of Anemas for speaking out against it, Bekkos changed his mind (1273); a reading of such Greek church fathers as St. Basil the Great, St. Cyril of Alexandria and St. Epiphanius convinced Bekkos that theological differences between the Greek and Latin Churches had been exaggerated.[4] After Patriarch Joseph I Galesiotes abdicated early in 1275 due to his opposition to the Council of Lyon, Bekkos was elected to replace him. His relationship with the emperor was sometimes stormy; although Michael VIII depended on Bekkos for maintaining his empire’s peace with the West, he was annoyed by Bekkos’s repeated intercessions on behalf of the poor. Michael was a crafty man, and knew how to make the Patriarch’s life miserable by sundry small humiliations, until, in March, 1279, Bekkos quit in disgust, and had to be coaxed back to undertake the job again (August 6, 1279). The final years of Michael VIII’s reign were entirely taken up with defending his empire against the threat posed by the Western king Charles of Anjou, and, in his anxiety to meet this threat, Michael enforced a "reign of terror" against opponents of union; but there is no convincing evidence that John Bekkos ever actively took part in or supported acts of violent persecution.[5]

Although earlier in his patriarchate Bekkos had promised not to reply to the pamphlets that were being circulated against the ecclesiastical union, by the latter years of Michael's reign he had changed his mind about this, and began "holding numerous synods, calling all and sundry, and dug up books and published many others,"[6] defending the union on theological grounds, arguing the compatibility of the Latin doctrine with Greek patristic tradition. The effect of this was further to alienate most of the Greek clergy against him; it was this publishing activity that later served as the explicit grounds for the charges that were laid against him.[7]

The ecclesial union engineered by Michael VIII was never popular in Byzantium, and, after his death (December 11, 1282), his son and successor, Andronicus II, repudiated it. On the day after Christmas, 1282, John Bekkos withdrew to a monastery; the former patriarch, Joseph I, was brought into the city on a stretcher, and a series of councils and public meetings ensued, led by a group of anti-unionist monks. Bekkos, in fear of violent death at the hands of a mob, was induced to sign a formal renunciation of his unionist opinions and of his priesthood (January, 1283), a renunciation which he afterwards disowned as extorted under duress, but which was used against him.[8] After this, Bekkos spent some years under house arrest at a large monastery in Prusa in Asia Minor. From there, he began a literary campaign to exonerate himself, and succeeded in having a council called to reexamine his case; it took place at the imperial palace of Blachernae in Constantinople, meeting in several sessions from February to August in the year 1285. Although the Council of Blachernae reaffirmed Bekkos’s earlier condemnation, in the council’s aftermath Bekkos, by a series of writings, succeeded in bringing its dogmatic statement against him (the Tomus of 1285) into such disrepute that its principal author, the Patriarch Gregory II, resigned (1289). Bekkos saw this as vindicating his position. He spent the remaining years of his life in prison in the fortress of St. Gregory, revising his writings, maintaining friendly relations with the Emperor and prominent Byzantine churchmen, but unwilling to give up his unionist opinions; he died in 1297.[9]

The basis of John Bekkos’s quarrel with his contemporaries was a disagreement with them over the implications of a traditional patristic formula, that states that the Holy Spirit proceeds from the Father through the Son (in Greek, διὰ τοῦ Υἱοῦ). Already in the ninth century, this expression was being pushed in two different directions: Latin writers saw it as implying the Augustinian doctrine that the Holy Spirit proceeds from the Father and the Son (Filioque); Greek writers, especially from the time of Patriarch Photios onward, saw it as consistent with the view that the Holy Spirit proceeds from the Father alone. Bekkos originally agreed with the Photian view, but his reading of the Greek fathers, and of medieval Greek writers like Nicephorus Blemmydes and Nicetas of Maroneia, caused him to change his mind. Much of John XI Bekkos’s debate with Gregory II was a debate over the meaning of texts from St. Cyril and other fathers, whose wording (the Spirit “exists from the Son”; the Spirit “fountains forth eternally” from the Son, etc.) Bekkos saw as consistent with the Latin doctrine, while Gregory of Cyprus interpreted such texts as necessarily referring to an eternal manifestation of the Holy Spirit through or from the Son. This thirteenth-century debate has considerable relevance for current-day ecumenical discussions between the Orthodox Church and the Roman Catholic Church.

Most of Bekkos’s writings are found in vol. 141 of J.-P. Migne’s Patrologia Graeca, although some still remain unedited. Migne reprints the seventeenth century editions of Leo Allatius; a more reliable re-edition was produced by H. Laemmer in the nineteenth century (Scriptorum Graeciae orthodoxae bibliotheca selecta, Freiburg, 1864), but even this edition lacks references for Bekkos’s many patristic citations. Only a few, short writings of Bekkos’s have received modern, critical editions. One of them is his work De pace ecclesiastica ("On Ecclesiastical Peace"), found in V. Laurent and J. Darrouzès, Dossier Grec de l’Union de Lyon, 1273–1277 (Paris, 1976); in it, Bekkos criticizes the foundations of the schism between the Churches on historical grounds alone, pointing out that the Patriarch Photios only chose to launch a campaign against the Latin doctrine after his claim to be rightful Patriarch of Constantinople was rejected by Pope Nicholas I.

Some of Bekkos’s most important works are as follows:

Little has been written on John XI Bekkos in English.

More has been written on Bekkos in other languages. Highly to be recommended is a new book in German: