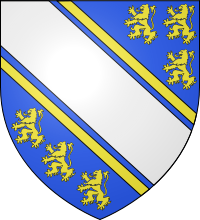 After his father's death at the Battle of Boroughbridge, the family lands were forfeited. It was not until after the fall of the Despensers that John was permitted to succeed to his inherited position as Earl of Hereford and Essex and hereditary Constable of England.

He married firstly, in 1325, to Alice FitzAlan (1314-1385/86), daughter of Edmund FitzAlan, 9th Earl of Arundel, and secondly to Margaret Basset (died 1355).[citation needed] After the marriage, it was discovered that the couple were related to the fourth degree of consanguinity and they were forced to live apart. An appeal to the Pope resulted on 19 February 1331 in a papal commission to the bishops of Lichfield and London to hold an enquiry into the case.[1] However, Roger Northburgh, the Bishop of Coventry and Lichfield, failed to act and the case was still pending when the Pope issued a further demand for an enquiry in 1334. [2]

He did not play much of a public role, despite his high titles and offices, most likely because he had some sort of incapacity.[3] His younger brothers were often deputed to fulfill his duties as Constable. He died at Kirkby Thore, Westmorland and was interred in Stratford Langthorne Abbey, London.