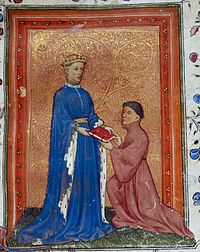 He was the younger son of Thomas de Mowbray, 1st Duke of Norfolk, and succeeded his elder brother Thomas as 5th Earl of Norfolk and 3rd Earl of Nottingham in 1405. He was appointed Earl Marshal of England and recovered his titles of Baron Mowbray and Segrave upon his coming of age in 1413, which is also the year that Henry V succeeded to the throne, keen to reconcile with former opponents of the House of Lancaster. He also received the remaining lands confiscated when the Mowbrays opposed the seizure of the throne by Henry IV.[2] In 1415 he sat in judgment on Richard of Conisburgh, 3rd Earl of Cambridge. In 1425 he was restored to his father's confiscated Dukedom of Norfolk.

He married Lady Katherine Neville, daughter of Ralph Neville, 1st Earl of Westmorland, and had only one son, John, later 3rd Duke of Norfolk.

He went to France with King Henry V and took part in the siege of Harfleur. He was too ill to fight at Agincourt.

He died in 1432 at Epworth, Lincolnshire, where his father had founded a monastery.