John of Eltham, Earl of Cornwall 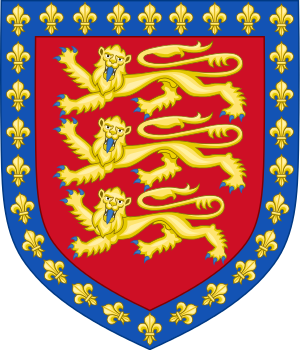 Arms of John, Earl of Cornwall.

John was born in 1316 at Eltham Palace, Kent. At the age of twelve, he was created Earl of Cornwall on 6 October 1328. Caught in the throes of the war between his father, Edward II, and mother Isabella, his growing years were turbulent. He was passed between his parents and even held in the Tower of London for a time before his brother, Edward III, led a coup against their mother and assumed his majority.

Information on John is scant, but by most historical accounts he was highly competent, and highly trusted by Edward. He was named "Guardian of the Realm" when Edward III was out of the country; was asked to open Parliament in Edward's absence, and was named Warden of the northern Marches, which gave him virtual autonomy in that portion of England.

Half a dozen brides had been proposed for him, most being the eligible daughters of the kings of Europe. Eventually, Maria, illegitimate daughter of Afonso IV of Portugal was chosen, but John died before the marriage.

At seventeen he was a key commander in the Battle of Halidon Hill (1333), a devastating defeat for the Scots. Later he commanded an army in the southwest of Scotland that put down resistance to Edward Balliol, whose claims to the Scottish throne were supported by England.

According to Scottish accounts, who view John as a ruthless destroyer, he burned down Lesmahagow Abbey when it was filled with people who had sought sanctuary from the wrath of the English troops. As the Scottish chronicler John of Fordun tells it, this violation of the sacred laws of sanctuary so enraged King Edward III that he killed his own brother in fury. According to modern historian Tom Beaumont James, this tale "challenges the distinction between history and story."

John died, shortly after turning 20, at Perth, probably from a fever. Edward buried his brother with all honours in a beautiful tomb in Westminster Abbey, in January 1337, and had masses said for his soul regularly.

As Earl of Cornwall, John had use of the coat of arms of the kingdom, differenced by a bordure France (i.e. azure semy of fleur-de-lys or).[1]

Next to Eltham Palace, his birthplace, is a footpath called 'King Johns Walk', named after him.