John of Lancaster, 1st Duke of Bedford, KG (20 June 1389 – 14 September 1435) was the third surviving son of King Henry IV of England by Mary de Bohun, brother to King Henry V, and acted as regent of France for his nephew, King Henry VI.

After his father's accession to the throne of England as Henry IV, John of Lancaster began to accumulate lands and lucrative offices. He was knighted on 12 October 1399 at his father's coronation and made a Knight of the Garter by 1402. Between 1403 and 1405 grants of the forfeited lands from the House of Percy and of the alien priory of Ogbourne, Wiltshire, considerably increased his income. He was appointed master of the mews and falcons in 1402, Constable of England in 1403 and Warden of the East March from 1403 to 1414. He was created Earl of Kendal, Earl of Richmond and Duke of Bedford in 1414 by his brother, King Henry V.

When Henry V died in 1422, Bedford vied with his younger brother, Humphrey, Duke of Gloucester, for control of the Kingdom. Bedford was declared Regent but focused on the ongoing war in France, while during his absence, Gloucester acted as Lord Protector of England. Bedford defeated the French several times, most notably at the Battle of Verneuil, until the arrival of Joan of Arc rallied the opposition. In 1431, Bedford had Joan tried and executed at Rouen, then arranged a coronation for the young Henry VI at Paris.

Bedford had been Governor in Normandy between 1422–1432[1][2] where the University of Caen was founded under his auspices. He was an extremely important commissioner of illuminated manuscripts, both from Paris (from the Bedford Master and his workshop) and England. The three most important surviving manuscripts of his are the Bedford Hours (British Library Ms Add 18850) and the Salisbury Breviary (Paris BnF Ms Lat. 17294), which were both made in Paris, and the Bedford Psalter and Hours of about 1420-23, which is English (BL Ms Add 42131). This last is signed in two places by Herman Scheere. All are lavishly decorated and famous examples of the style of the period.

John's first marriage was to Anne, daughter of John the Fearless on 13 May 1423 in Troyes,[3][lower-alpha 1] The couple were happily married, despite being childless. Anne died of the plague in Paris in 1432.[4]

John's second marriage was to Jacquetta of Luxembourg.[5]

In addition, out of wedlock he had a daughter named Mary, who married Pierre de Montferrand (d. 1454), son of the lord of Langoiran, Soudan de la Trau, and had issue; and a son, Richard.

John died during the Congress of Arras at his Castle of Joyeux Repos in Rouen and was buried at Rouen Cathedral. He had no legitimate surviving issue.[6]

Georgette Heyer's novel My Lord John deals with his life from when he was four to about twenty.

In the 2011 Philippa Gregory novel, The Lady of the Rivers, John features as the first husband of main character, Jacquetta of Luxembourg.

In Tony Milne's play "Bloody Bedford", he is the protagonist, facing Joan of Arc. The play focuses on his role as the last English Regent of France. 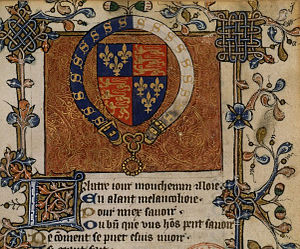 Bedford's coat of arms in a manuscript containing the Livre Charny of Geoffroi de Charny and owned by the duke of Bedford (Bibliothèque nationale de France, Ms Fr. 25447, fol. 3).

As a son of the sovereign, John bore the arms of the kingdom, differenced by a label of five points per pale ermine and France.[7]

In the Bedford Book of Hours[8] these arms are shown supported by an eagle collared with a crown and a sable yale all on a gold field sewn with gold uprooted tree-stumps. It is possible that the yale was painted in silver which has tarnished black. The shield is surrounded with a pair of banners gules which reverse in argent with the motto repeated four times: A vous entier (To you / yours entire[ly]). This may be a pun on the German Tier, i.e., beast, or on (English) tears —or 'tiers' of meaning, including tierce, referring to himself as third in line to his father's throne and by now rightful king but for the baby Henry VI. The Hours were supposedly produced as a courtship present from John to his wife, Anne, daughter of John the Fearless of Burgundy.[citation needed]

There is a Queen's Arms public house sign from Birmingham[9] which uses these supporters reversed and with an argent yale uncollared on a shield showing the English royal arms at left and to the right six divisions representing Lorraine. John's second wife, Jacquetta of Luxembourg, cousin to the Emperor (the King of Hungary), was mother to Elizabeth Woodville who may be this queen. Elizabeth Woodville's right to inherit these armorial supporters would seem dubious if they belong to her mother's first husband or to his first wife. Alternatively, though equally incorrect, the arms may be her mother's used in a flattering conceit.[citation needed]