Johnson County is a county located in the U.S. state of Tennessee. As of the 2010 census, the population was 18,244.[2] Its county seat is Mountain City.[3] It is the state's northeasternmost county, sharing borders with Virginia and North Carolina.

Johnson County was created in 1836 from parts of Carter County. This followed several years of bickering over the location of Carter County's seat, with residents of what is now Johnson County arguing that travel to Elizabethton was too lengthy and difficult. When their petition to move the seat to a more central location was rejected, they petitioned the state legislature for the creation of a new county. The new county was named after Thomas Johnson, an early settler. The county seat was initially named "Taylorsville" in honor of Colonel James P. Taylor (it was changed to "Mountain City" in the 1880s).[1][4]

Most Johnson Countians supported the Union during the Civil War. The county's residents rejected secession by a margin of 788 to 111 in Tennessee's secession referendum on June 8, 1861.[5] The county sent a sizable delegation to the Greeneville session of the pro-Union East Tennessee Convention in June 1861.[6]

Due in large part to the county's remoteness, the railroads did not reach Johnson until the early 1900s. The arrival of the railroads during this period aided the development of the timber and manganese mining industries.[1] 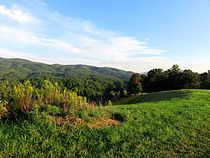 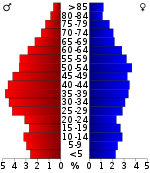 Male inmates in the Northeast Correctional Complex, southwest of Mountain City, account for 1,299 (7.4%) of the county's population.[16]

The county is historically Republican and is located within Tennessee's 1st congressional district, which has not been represented by a Democrat in over 120 years. It reportedly was the strongest county for Calvin Coolidge in 1924,[17] Herbert Hoover in 1932[18] and Alf Landon in 1936.[19] The Republican candidate has continued to consistently win since 1956.[20][21] Since 1992 no Republican candidate has received less than 57% of the county's vote and in 2008 John McCain received 70.1%.[22] 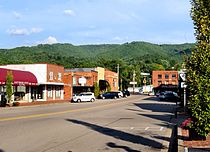 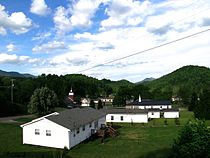