Jokkmokk (Lule Sámi: Jåhkåmåhkke or Dálvvadis; Northern Sámi: Dálvvadis; Finnish: Jokimukka) is a locality and the seat of Jokkmokk Municipality in Norrbotten County, province of Lapland, Sweden with 2,786 inhabitants in 2010.[1] The Sámi name of the place means "River's Curve", due to the meandering river that runs through it. It is just north of the Arctic Circle.

Jokkmokk was a transit center for Sami refugees from Norway during World War II, in addition to the center in Kjesäter.

Jokkmokk Market has a long history and has a more than 400-year unbroken tradition. The first Thursday in February every year, thousands and thousands of people gather in Jokkmokk for concerts, exhibitions and trade. Jokkmokk Market is still one of the most important social events for the Sámi people in Sápmi. Temperatures during the festival can drop as low as -40°. 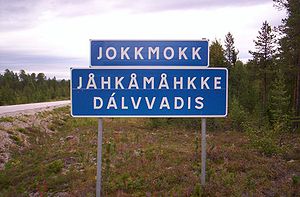 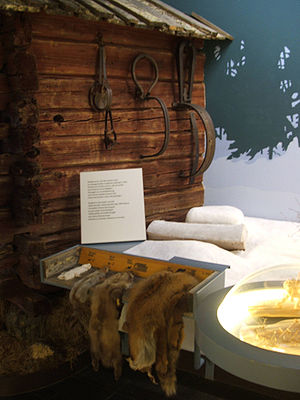 Influenced by its inland and northerly position, Jokkmokk's variety of a subarctic climate is very cold by Swedish standars. Summers are normally relatively tempered in spite of the day-round light and the dark winters are long and cold.