Jomala is a municipality of Åland, an autonomous territory of Finland.

The municipality is unilingually Swedish.

Mariehamn Airport is located in Jomala.

"Jomala" is the name of a god common to many Finno-Ugric peoples. Jumala is Finnish for god and Jomala is one of the sites where Christian church organized itself in Finland. One of oldest churches in Finland stands here as testament to these times.

Jomala was inhabited around 2000 B.C with Jettböle being one of the most renowned prehistoric sites. Other ancient sites include Borgberget, where there was a Viking fortress, and Kasberget which was one of the many mountains where signal fires were lit when enemies were seen approaching.

Before the city of Mariehamn was established in 1861, the peninsula where the city is situated was a part of Jomala. 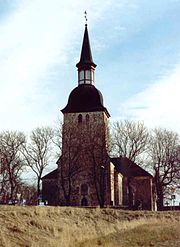 The church of Jomala in 1991
File:Jomala prästgård, våren 1991..jpg
The Jomala Rectory as seen by Lake Dalkarby in 1991. The rectory was built in 1848 and an Art Nouveau veranda was added in the beginning of the 20th century
File:BjörsbyVäderkvarn.JPG
Windmill in Björsby

The church of Jomala is dedicated to the patron saint of Åland, St. Olav. It is the oldest surviving church in Finland[6] and it is situated in the village of Prästgården. The oldest parts of the church date from the 13th century. The church tower is 52 meters tall and there is also a memorial for all the Ålanders who emigrated. Another memorial refers to sailors who lost their lives on sea. The "King of Åland" Julius Sundblom is buried here. A large medieval cemetery with graves from the Iron Age can be visited behind the church.

The Lemström channel divides Jomala from its neighboring municipality, Lemland. It was widened by Russian POWs in 1882.

The Kungsö battery was one of the ten coastal batteries which the Russians built in Åland during the First World War in 1916. The battery was situated 32 meters above sea level, on the highest point of Dalsberg. Finnish, Swedish and German troops invaded it in 1918. It was dismantled in 1919 by Finnish civilian workers.

There are various well-preserved windmills in Jomala, e.g. on Norrgård farm in Björsby.[7]

Since Jomala belongs to the Swedish-speaking areas of Finland, Midsummer is celebrated every year by hoisting up a maypole. It was a tribute to the sun in the ancient times. Harvest festivities are held every September.