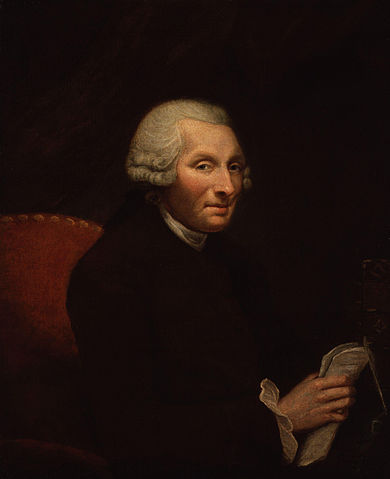 Portrait of Jonas Hanway by James Northcote, circa 1785.

He was born at Portsmouth, on the south coast of England.

Whilst still a child, his father, who had been a victualler, died, and the family subsequently moved to London.

In 1729, Jonas was apprenticed to a merchant in Lisbon. In 1743, after he had been in business for himself for some time in London, he became a partner with Mr Dingley, a merchant in St Petersburg, and in this way was led to travel in Russia and Persia. Leaving St Petersburg on 10 September 1743, and passing south by Moscow, Tsaritsyn and Astrakhan, he embarked on the Caspian Sea on 22 November and arrived at Astrabad on 18 December. Here his goods were seized by Mohammed Hassan Beg, and it was only after great privations that he reached the camp of Nadir Shah, under whose protection he recovered most (85%) of his property.

His return journey was embarrassed by sickness (at Resht), attacks from pirates, and six weeks' quarantine; he only arrived at St Petersburg on 1 January 1745. He again left the Russian capital on 9 July 1750 and travelled through Germany and the Netherlands to England (28 October). The rest of his life was mostly spent in London, where the narrative of his travels (published in 1753) soon made him a man of note, and where he devoted himself to philanthropy and good citizenship.

In 1756, Hanway founded The Marine Society, to keep up the supply of British seamen; in 1758, he became a governor of the Foundling Hospital, a position which was upgraded to vice president in 1772; he was instrumental in the establishment the Magdalen Hospital; in 1761 he procured a better system of parochial birth registration in London; and in 1762 he was appointed a commissioner for victualling the navy (10 July); this office he held till October 1783.

He died, unmarried, on 5 September 1786 and was buried in the crypt at St. Mary's Church, Hanwell. A monument to his memory, sculpted by John Francis Moore was erected in Westminster Abbey in 1786.[1]

Hanway was the first Londoner, it is said, to carry an umbrella, and he lived to triumph over all the hackney coachmen who tried to hoot and hustle him down.[2] He attacked vail-giving, or tipping, with some temporary success; by his onslaught upon tea-drinking he became involved in controversy with Johnson and Goldsmith. His last efforts were on behalf of little chimney-sweeps. His advocacy of solitary confinement for prisoners and opposition to Jewish naturalization were more questionable instances of his activity in social matters.[3]

Hanway created seventy-four printed works, mostly pamphlets. Of literary importance is the Historical Account of British Trade over the Caspian Sea, with a Journal of Travels, etc. (London, 1753). He's also cited frequently for his work with the Foundling Hospital, particularly his pamphlets detailing the earliest comparative "histories" of the foundation versus similar institutions abroad.[4]