Lua error in Module:Redirect at line 61: could not parse redirect on page "Jonathan Edwards (athlete)".

Jonathan David Edwards, CBE (born 10 May 1966 in London) is a former triple jumper. He is a former Olympic, World, Commonwealth and European champion, and has held the world record in the event since 1995.

Following his retirement as an athlete, Edwards has worked as a sports (primarily athletics) commentator and presenter for BBC television. Formerly a devout Christian, he also presented episodes of the BBC Christian worship programme Songs of Praise, until he renounced his faith in 2007. In 2011 he was elected President of Wenlock Olympian Society following the death of its then President, Roy Rogers. He was a member of the London Organising Committee of the Olympic and Paralympic Games for the 2012 games.

Edwards attended West Buckland School[4] where his potential for the triple jump was spotted at an early age. He was a strong all-rounder and on leaving received the school's top award for sporting and academic excellence, the Fortescue Medal. Contemporaries with Edwards at West Buckland School included Victor Ubogu and Steve Ojomoh, both former Bath and England Rugby international players. Edwards now has a Sports Hall at West Buckland named after him, The Jonathan Edwards Sports Centre. Edwards then read Physics at Durham University, attending Van Mildert College.

Due to his strong Christian beliefs during his athletic career, discussed in more detail below, he initially refused to compete on Sundays,[5] but eventually decided to do so in 1993. This decision proved timely, since the qualifying round at that year's World Championships took place on a Sunday. He went on to win the bronze medal.

In his breakthrough year of 1995, Edwards produced a jump of 18.43 m (60 feet ​5 1⁄2 inches) at the European Cup. The leap was wind assisted and did not count for record purposes, but it was a sign of things to come as he capped an unbeaten year with a historic gold medal performance at the World Championships, in which he broke the world record twice in the same meeting. On his first jump, he became the first man to legally pass the 18-metre barrier with a jump of 18.16 m (59 feet 7 inches). That record lasted for about 20 minutes. His second jump of 18.29 m made him the first to jump 60 feet. During his commentary for the 2008 Summer Olympics, Edwards observed that during the 1995 World Championships, he felt as if "he could jump as far as he needed to". Later the same year Edwards became the BBC Sports Personality of the Year. 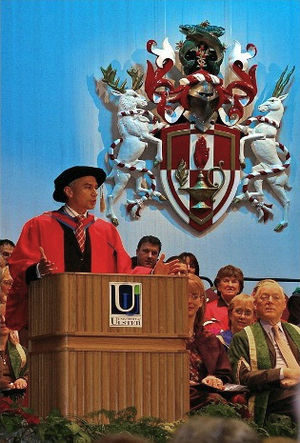 Following his retirement, Edwards has pursued a media career as a television presenter mainly working for the BBC as a sports commentator and presenter, and on programmes such as Songs of Praise until he gave up this programme, due to his loss of faith, in February 2007.[6]

Edwards regularly presents BBC coverage of athletics. When he is not presenting coverage, Edwards often provides expert analysis on field events as part of the BBC commentary team.

Edwards also served as a presenter for the Olympic Announcement ceremonies during the IOC sessions in Guatemala in 2007 and Copenhagen in 2009.

In 2004, Edwards joined with Paula Radcliffe on an Olympic Special Who Wants to Be a Millionaire?. The pair raised £64,000 for charity with half of that sum going to the British Olympic Association and a quarter of the sum going to Asthma UK.[8]

He was a member of the London Organising Committee of the Olympic and Paralympic Games, representing athletes in the organisation of the 2012 Summer Olympics.[9]

An honorary doctorate was conferred upon him at a ceremony at the University of Exeter on 21 January 2006.[12]

Later in the same year, an honorary doctorate of the university (DUniv) was conferred upon him at the winter graduation ceremony of the University of Ulster (19 December 2006).[13]

Edwards lives with his wife Alison in Newcastle upon Tyne. They have two sons, Nathan and Sam. In August 2014, Edwards was one of 200 public figures who were signatories to a letter to The Guardian opposing Scottish independence in the run-up to September's referendum on that issue.[14]

Edwards initially refused to compete on Sundays due to his devout Christian beliefs, a decision that cost him a chance to compete in the 1991 World Championships. However, in 1993, after much deliberation and discussion with his father (a vicar), he changed his mind, deciding that God gave him his talent in order for him to compete in athletics. He once said "My relationship with Jesus and God is fundamental to everything I do. I have made a commitment and dedication in that relationship to serve God in every area of my life."[6] Edwards presented episodes of the Christian television show Songs of Praise until 2007.

However, in February 2007 it was widely reported that Edwards had lost his faith in God. The Daily Mail described Edwards as a "man deeply troubled by the collapse of his Christian faith" but revealed that a friend said "They still go to church as a family".[15][16] The Daily Mail article also quoted Edwards as saying that he was going through a difficult period in his life, one that was deeply personal to him and his family such that he did not wish to comment on it.[15]

In an interview in The Times in June 2007, Edwards said:

If there is no God, does that mean that life has no purpose? Does it mean that personal existence ends at death? They are thoughts that do my head in. One thing that I can say, however, is that even if I am unable to discover some fundamental purpose to life, this will not give me a reason to return to Christianity. Just because something is unpalatable does not mean that it is not true.

Furthermore, in the interview with The Times he also stated "When you think about it rationally, it does seem incredibly improbable that there is a God." In the same interview he also said "I feel internally happier than at any time of my life."[17]

In an interview for a film by Matthew Syed broadcast on BBC One at around 18:30 on the evening of 12 August 2012, after the last medal of the 2012 Summer Olympic Games in London was awarded, Jonathan Edwards stated "It may seem odd to quote from the bible since I have lost my faith, but...".

An interview reported by Jane Oddy in Mirror News (27 February 2014) quoted him saying "I am happy and actually it’s fine. I don’t miss my faith. In many ways I feel more settled and happier in myself without it. I don’t know if that is related to losing my faith or would have been the case anyway, but it’s a non-issue as far as I am concerned.

Seven years on I don’t feel a gap in my life and I suppose that’s the proof of the pudding isn’t it? Had I suddenly thought that life doesn’t quite feel right, maybe I’d re-examine that – re-examine my faith. In fact, more than ever, I feel comfortable with where I am in life.”[18]