Jones County is a county located in the U.S. state of North Carolina. As of the 2010 census, the population was 10,153,[1] making it the fifth-least populous county in North Carolina. Its county seat is Trenton.[2]

The county was formed in 1779 from the southwestern part of Craven County. It was named for Willie Jones,[3] a Revolutionary leader and president of the North Carolina Council of Safety; he was later the state's chief opponent of ratification of the United States Constitution He was also a plantation slave owner.

Jones County is a member of the regional Eastern Carolina Council of Governments. The Jones County Government relies entirely upon an all volunteer (non-paid) fire department force segregated by geographic location(s). The Law Enforcement structure consists of one paid Pollocksville Police Chief, one paid Maysville Police Chief, and an elected Sheriff with a small (less than 25 person force) to handle law enforcement, detention, and emergency communications. The county government relies heavily on volunteer deputization. Emergency ambulance services consist of one full-time medical unit dispatched from the town of Trenton and relies heavily on other volunteer EMS personnel geographically scattered around the county to assist with a medical emergency. Additional EMS transportation vehicles are subsidized by EMS services provided by adjacent counties or private enterprises. There is no animal control unit. The County Detention Facility is a 21 bed (3 female) facility located in the basement of the county courthouse and the detention staff double up as the communications/911 emergency communications staff. Prisoner Meals are provided by contract through licensed restaurants.

Jones County lies 8 miles west of the Atlantic Ocean but the only waterfront areas in the county are along the Trent and White Oak rivers. Part of the Great Dover Swamp also lies within the county lines. Many enjoy boating and fishing activities as well as camping at the 17 Family Campground along highway 17 north in Maysville. The Croatan National Forest offers hiking trails and wildlife viewing and the wide open spaces of fields and forests are a haven for outdoors men. 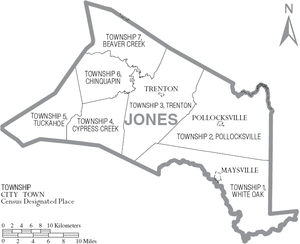 The county is divided into seven townships, which are both numbered and named: