From Infogalactic: the planetary knowledge core
Jump to: navigation, search
Stack array of the Jones and Laughlin Pittsburgh Works on the south side of the Monongahela River, 1955.

The Jones and Laughlin Steel Company began as the American Iron Company, founded in 1852 by Bernard Lauth and B. F. Jones, a few miles (c 4 km) south of Pittsburgh along the Monongahela River.[1] Lauth's interest was bought in 1854 by James H. Laughlin.[2] The first firm to bear the name of Jones and Laughlin was organized in 1861 and headquartered at Third & Ross in downtown Pittsburgh.[3][4] Katharine Hepburn's maternal uncle, Frank Garlinghouse, was a longtime engineer for J&L Steel.[5]

Originally producing only iron, the enterprise began the production of steel in 1886. Over the ensuing 60 years, the company expanded its facilities and its operations along both sides of the Monongahela River and along the Ohio River. The Hot Metal Bridge across the Monongahela River was built to connect the blast furnaces on one side of the river with the rolling mills on the other side of the river. In 1905, a new plant was begun at Aliquippa, Pennsylvania. The company also owned coal mines in western Pennsylvania in its early days, including some reached by an incline in Pittsburgh's South Side which connected to the railroad over the bridge adjacent to the Hot Metal Bridge. Other mines were along the nearby Becks Run, also directly connected by railroad. The incline and mines were gone before 1900, but mining continued in Pennsylvania towns such as Vestaburg and elsewhere. The former Otis Steel company along the Cuyahoga River in Cleveland was purchased in 1942, and then in the mid-1960s a finishing plant was constructed in Hennepin, Illinois.[6]

In 1978, J & L Steel acquired Youngstown Sheet and Tube. In 1981, J & L Steel bought a stainless steel mill from McLouth Steel Products in Detroit, which was probably an attempt to try to get closer to the auto market. It merged with Republic Steel in 1984 to form LTV Steel. 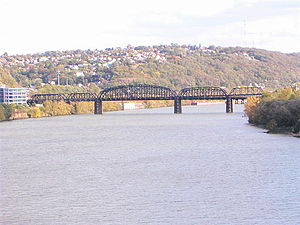 Hot Metal Bridge, formerly used by Jones and Laughlin to transport steel across the Monongahela River

The J&L Coal Incline was a 1,300-foot (400 m) incline connecting a coal mine to the J&L iron making facility. It ran from Josephine Street, between South 29th street and South 30th Street on the lower end to Summer Street on its upper end.[9] It was supplied with coal from the American Mine, opened in 1854.[10][11]

From hot strip to mixed-use development

Dismantling of the buildings which housed J & L Steel produced an upsurge of building on the tracts of land where the buildings had stood. By September 2005, numerous new structures had been erected on both sides of the Monongahela River. The Pittsburgh Technology Center now stands on the north side of the Monongahela River where the blast furnaces once stood and the SouthSide Works, a commercial and residential development, stands on the south side where milling operations occurred. The Hot Metal Bridge has been converted into a road bridge and a pedestrian/bike bridge (which forms part of the Great Allegheny Passage). Another development, Almono, is under construction as of 2014, on the site of the coke works.

Jones & Laughlin Steel Co. is a builder of record for a number of bridges and other structures that are listed on the National Register of Historic Places.[12][13]