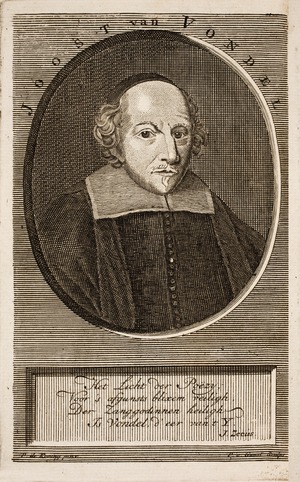 Joost van den Vondel (Dutch: [ˈjoːst fɑn dɛn ˈvɔndəl];[1] 17 November 1587 – 5 February 1679) was a Dutch poet, writer and playwright. He is considered the most prominent Dutch poet and playwright of the 17th century. His plays are the ones from that period that are still most frequently performed, and his epic Joannes de Boetgezant (1662), on the life of John the Baptist, has been called the greatest Dutch epic.[2]

Performances of his theatre pieces occurred regularly until the 1960s. The most visible was the annual performance, on New Year's Day from 1637 to 1968, of Gijsbrecht van Aemstel.

Vondel remained productive until a very old age. Several of his most notable plays like nl (Lucifer (play)) and nl (Adam in Exile) were written after 1650, when he was already 65, and his final play nl (Noah (play)), written at the age of eighty, is considered one of his finest.

Vondel was born on 17 November 1587 on the Große Witschgasse in Cologne, Holy Roman Empire. His parents were Mennonites of Antwerpian descent. In 1595, probably because of their religious conviction, they fled to Utrecht, and from there, they eventually moved to Amsterdam in the newly formed Dutch Republic.

At the age of 23, Vondel married Mayken de Wolff. Together they had four children, of whom two died in infancy. After the death of his father in 1608, Vondel managed the family hosiery shop on the Warmoesstraat in Amsterdam. In the meantime, he began to learn Latin and became acquainted with famous poets such as Roemer Visscher.

Around the year 1641, he converted to Catholicism. This was a great shock to most of his fellow countrymen because the main conviction and de facto state religion in the Republic was Calvinist Protestantism. It is still unclear why he became a Catholic although his love for a Catholic lady may have played a role in this (Mayken de Wolff had died in 1635).

During his life, he became one of the main advocates for religious tolerance. After the arrest, trial and the immediate beheading of the most important civilian leader of the States of the Netherlands, Johan van Oldenbarnevelt (1619), at the command of his enemy, Prince Maurits of Nassau, and the Synod of Dort (1618–1619), the Calvinists had become the decisive religious power in the Republic. Public practice of Catholicism, Anabaptism and Arminianism was from then on officially forbidden but worship in clandestine houses of prayer was tolerated. Vondel wrote many satires criticising the Calvinists and extolling Oldenbarnevelt. That, together with his new faith, made him an unpopular figure in Calvinist circles. He died a bitter man though he was honoured by many fellow poets, on 5 February 1679.

Amsterdam's biggest park, the Vondelpark, bears his name. There is a statue of Vondel in the northern part of the park. The Dutch five guilder banknote bore Vondel's portrait from 1950 until it was discontinued in 1990. 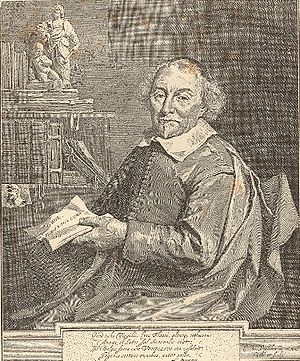 It has been suggested[3] that John Milton drew inspiration from Lucifer (1654) and Adam in Ballingschap (1664) for his Paradise Lost (1667). In some respects the two works have similarities: the focus on Lucifer, the description of the battle in heaven between Lucifer's forces and Michael's, and the anti-climax as Adam and Eve leave Paradise.

These similarities however can be explained[citation needed] in that they probably both drew inspiration from the Bible and perhaps Adamus exil by Hugo Grotius. Although it is certain that Milton knew some Dutch, because Roger Williams taught him in exchange for Hebrew lessons, it is to be doubted that Milton knew enough Dutch to understand the plays, and at that time English translations of Vondel's works did not exist. Lastly, both works differ in many points, mainly in the dialogues.

One example of similarity is the following:

"Here may we reign secure, and in my choice To reign is worth ambition, though in Hell.

Better to reign in hell than serve in heaven."

Translation:
Is it fate that I will fall, robbed of honour and dignity,
Then let me fall, if I were to fall, with this crown upon my head
This sceptre in my fist, this company of loyals,
And as many as are loyal to our side.
This fall would honour one, and give unwilting praise:
And rather [would I be] foremost king in any lower court,
Than rank second in most holy light, or even less
Thus I justify my revolt, and will now fear pain nor hindrance.