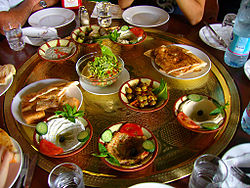 A large plate of Jordanian mezze in Petra, Jordan.

Jordanian cuisine is a traditional style of food preparation originating from, or commonly used in Jordan that has developed from centuries of social and political change.

There is wide variety of techniques used in Jordanian cuisine ranging from baking, sautéeing and grilling to stuffing of vegetables (carrots, leaves, eggplants, etc.), meat, and poultry. Also common in Jordanian cuisine is roasting or preparing foods with special sauces.

As one of the largest producers of olives in the world,[1] olive oil is the main cooking oil in Jordan. Herbs, garlic, onion, tomato sauce and lemon are typical flavours found in Jordan. The herbs Za'atar[2] and Sumac[3] grow wild in Jordan and are closely identified with Jordanian cuisine. Yogurt is commonly served alongside food and is a common ingredient itself, in particular, Jameed, a form of dried yogurt is unique to Jordanian cuisine and a main ingredient in Mansaf[4][5] the national dish of Jordan,[6][7] and a symbol in Jordanian culture for generosity.

Internationally known foods which are common and popular everyday snacks in Jordan include hummus, which is a puree of chick peas blended with tahini, lemon, and garlic and Falafel a deep-fried ball or patty made from ground chickpeas. A typical mezze includes foods such as koubba maqliya, labaneh, baba ghanoush, tabbouleh, olives and pickles. Bread, Rice, Freekeh, Bulgur (bulghur) all have a role in Jordanian cuisine.

Popular desserts include as baklava, knafeh, halva and qatayef a dish made specially for Ramadan, in addition to seasonal fruits such as watermelons, figs and cactus pear which are served in summer.[8]

Food is a very important aspect of Jordanian culture. In villages, meals are a community event with immediate and extended family present. In addition, food is commonly used by Jordanians to express their hospitality and generosity. Jordanians serve family, friends, and guests with great pride in their homes; no matter how modest their means. A 'Jordanian invitation' means that you are expected to bring nothing and eat everything.

Most of the celebrations in Jordan are exceptionally diverse in nature and quite festive at the same time. Each celebration is marked with dishes from Jordanian cuisine spread out and served to the guests. There are many traditional small gatherings in Jordan too; even in those gatherings a lot of meals are served. Customs such as weddings, birth of a child, funerals, birthdays and specific religious and national ceremonies such as Ramadan and Jordan's independence day all call for splendid food to be served to guests. To celebrate the birth of a child, Karawiya, a caraway flavoured pudding is commonly served to guests. 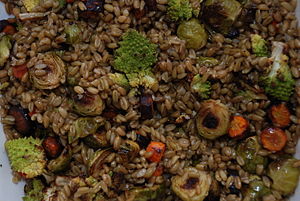 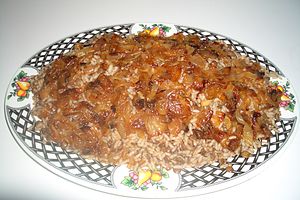 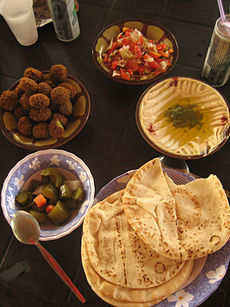 By far the most dominant style of eating in Jordan, mezze is the small plate, salad, appetizer, community style eating, aided by dipping, dunking and otherwise scooping with bread. Mezze plates are typically rolled out before larger main dishes.[14]

In a typical Jordanian mezze, you might find any combination of the following dishes: 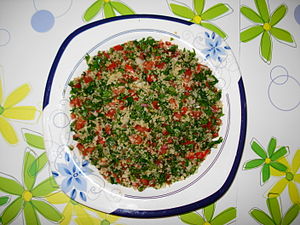 In Jordan, meals are usually started with soups. Jordanian soups are usually named after their main ingredient such as:

The Flavor of Jordan video