D. José, Prince of Brazil, Duke of Braganza (Portuguese pronunciation: [ʒuˈzɛ]; 20 August 1761 – 11 September 1788) was the heir apparent to the Kingdom of Portugal until his death in 1788, as the eldest child of Queen Maria I of Portugal and King Pedro III of Portugal,[lower-alpha 1] members of the House of Braganza

José died of smallpox at the age of 27, causing his younger and ill-prepared brother,[1] Infante João, to become heir-apparent and eventually King. João's reign would be a turbulent one, seeing Napoleonic invasion of Portugal and the loss of the Portuguese Empire's largest and wealthiest colony, Brazil. 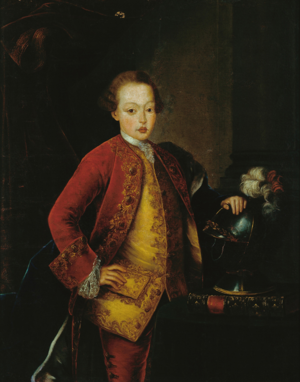 José was born at the Real Barraca where the Palace of Ajuda in Lisbon stands today. He was named after his grandfather who was the ruling King of Portugal at the time of his birth. His grandfather created him Prince of Beira, this being the first time when the title was given to a male.

At the time of his birth, his parents were the Prince and Princess of Brazil, his mother the Heir presumptive of the king.

On 21 February 1777, when he was 15 years old, he married his 30-year-old aunt the Infanta Benedita of Portugal. Benedita was an attractive woman and the main candidate for the wife of José. The marriage was the express wish of the king José.

They had no children, however she miscarriaged twice: in 1781 and in 1786. Three days after their wedding, José's grandfather and Benedita's father the old King José died, and his mother succeeded as queen regnant. Infante José became the new crown prince, being accorded the titles Prince of Brazil and 14th Duke of Braganza.

José died at the age of 27 of smallpox. Upon José's death, his younger brother Infante John became heir-apparent to the throne and thus the new Prince of Brazil. José died on the Ajuda Royal Complex in Lisbon. His mother and wife were very badly affected by his death. His wife would be known as the "Dowager Princess of Brazil" till her death in 1829.

Media related to José, Prince of Beira and Brazil at Wikimedia Commons