José Froilán González (October 5, 1922 – June 15, 2013) was an Argentine racing driver, particularly notable for scoring Ferrari's first win in a Formula One World Championship race at the 1951 British Grand Prix. He made his Formula One debut for Scuderia Achille Varzi in the 1950 Monaco Grand Prix. His last Grand Prix was the 1960 Argentine Grand Prix.

González's nicknames were The Pampas Bull (by his English fans) and El Cabezón (Fat Head, by his close colleagues).

On 10 July 2011, during the British Grand Prix meeting, González was honoured by the Ferrari team and the FIA on the 60th anniversary of Ferrari's first Formula One World Championship race victory. As part of the celebration, Ferrari driver Fernando Alonso drove González' Ferrari 375 F1 for four laps of the Silverstone track. Later that day, Alonso won the British Grand Prix in his Ferrari 150° Italia.

He died in Buenos Aires from respiratory failure, aged 90.

* Shared drive.
** Joint fastest lap.
† González started the race in a Ferrari 553 Squalo, but took over one of his team mates' 625 during the race. 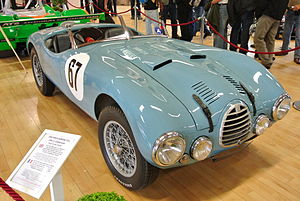 1950 Simca Gordini T15s, as raced, and retired, at the 1950 24 Hours of Le Mans by José Froilán González and Juan Manuel Fangio