From Infogalactic: the planetary knowledge core
Jump to: navigation, search
For the American playwright, see Joseph A. Walker (playwright).

Joseph Albert "Joe" Walker (February 20, 1921 – June 8, 1966), flew the first two spaceplane flights, in 1963, becoming the seventh American astronaut. Walker was a (Captain in the United States Air Force), an American World War II pilot, an experimental physicist, a test pilot with NASA, and a member of the U.S. Air Force Man In Space Soonest spaceflight program. In 1963, he made two X-15 experimental rocket aircraft flights beyond the altitude of 100 kilometres (62 miles)—the Kármán line which marks the boundary of outer space and qualified Walker as an astronaut under both the rules of the U.S. Air Force and of the Fédération Aéronautique Internationale (FAI).

Born in Washington, Pennsylvania, Walker graduated from Trinity High School in 1938. He earned his Bachelor of Arts degree in physics from Washington and Jefferson College in 1942, before entering the United States Army Air Forces. He was married and had four children.

After World War II, Walker separated from the Army Air Force and joined the National Advisory Committee for Aeronautics (NACA) Aircraft Engine Research Laboratory in Cleveland, Ohio, as an experimental physicist. While in Cleveland, Walker became a test pilot, and he conducted icing research in flight, as well as in the NACA icing wind tunnel. He transferred to the High-Speed Flight Research Station in Edwards, California, in 1951.

Walker served for 15 years at the Edwards Flight Research Facility - now called the Neil A. Armstrong Flight Research Center. By the mid-1950s, he was a Chief Research Pilot. Walker worked on several pioneering research projects. He flew in three versions of the Bell X-1: the X-1#2 (two flights, first on 27 August 1951), X-1A (one flight), X-1E (21 flights). When Walker attempted a second flight in the X-1A on 8 August 1955, the rocket aircraft was damaged in an explosion just before being launched from the JTB-29A mothership. Walker was unhurt, though, and he climbed back into the mothership with the X-1A subsequently jettisoned.

Walker was the chief project pilot for the X-3 program. Walker reportedly considered the X-3 to be the worst airplane that he ever flew. In addition to research aircraft, Walker flew many chase planes during test flights of other aircraft, and he also flew in programs that involved the North American F-100 Super Sabre, McDonnell F-101 Voodoo, Convair F-102 Delta Dagger, Lockheed F-104 Starfighter and Boeing B-47 Stratojet.

In 1958, Walker was one of the pilots selected for the U.S. Air Force's Man In Space Soonest (MISS) project, but that project never came to fruition. That same year, NACA became the National Aeronautics and Space Administration (NASA), and in 1960, Walker became the first NASA pilot to fly the X-15, and the second X-15 pilot, following Scott Crossfield, the manufacturer's test pilot. On his first X-15 flight, Walker did not realize how much power its rocket engines had, and he was crushed backward into the pilot's seat, screaming, "Oh, my God!". Then, a flight controller jokingly replied "Yes? You called?" Walker would go on to fly the X-15 24 times, including the only two flights that exceeded 100 kilometres (62 miles) in altitude, Flight 90 (on 19 July 1963: 106 km (66 mi)) and Flight 91 (on 22 August 1963: 108 km (67 mi)).

Walker was the first American civilian to make any spaceflight,[1] and the second civilian overall, preceded only by the Soviet Union's cosmonaut, Valentina Tereshkova[2] one month earlier. Flights 90 and 91 made Walker the first human to make multiple spaceflights.

Walker also became the first test pilot of the Bell Lunar Landing Research Vehicle (LLRV), which was used to develop piloting and operational techniques for lunar landings. On 30 October 1964, Walker took the LLRV on its maiden flight, reaching an altitude of about 10 ft and a total flight time of just under one minute. He piloted 35 LLRV flights in total. Neil Armstrong later flew this craft many times in preparation for the spaceflight of Apollo 11 - the first manned landing on the Moon - including crashing it once and barely escaping from it with his ejection seat. 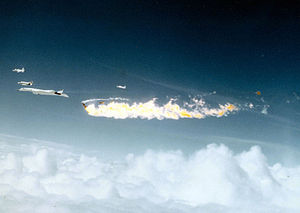 Walker was killed on 8 June 1966, when his F-104 Starfighter chase aircraft collided with a North American XB-70 Valkyrie.[3] At an altitude of about 25,000 ft (7.6 km)[4] Walker's Starfighter was one of five aircraft in a tight group formation for a General Electric publicity photo when his F-104 drifted into contact with the XB-70's right wingtip. It flipped over, and rolling inverted, passed over the top of the XB-70, struck the vertical stabilizers and left wing and exploded, destroying the Valkyrie's rudders and damaging its left wing. [N 1]

The USAF summary report of the accident investigation stated that, given the position of the F-104 relative to the XB-70, the F-104 pilot would not have been able to see the XB-70's wing, except by uncomfortably looking back over his left shoulder. The report stated that Walker, piloting the F-104, likely maintained his position by looking at the fuselage of the XB-70, forward of his position.

The F-104 was estimated to be 70 ft (20 m) to the side of, and 10 ft (3 m) below, the fuselage of the XB-70. The report concluded that from that position, without appropriate sight cues, Walker was unable to properly perceive his motion relative to the Valkyrie, leading to his aircraft drifting into contact with the XB-70's wing.[6][7]

The accident investigation also pointed to the wake vortex off the XB-70's right wingtip as the reason for the F-104's sudden roll over and into the bomber.[7] A sixth plane in the incident was a civilian Learjet 23 that held the photographer. Because the formation flight and photo were unauthorized, the careers of several Air Force colonels ended as a result of this aviation accident.[8][9][10] 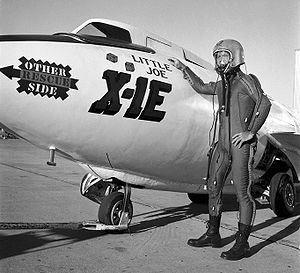 Walker in his pressure suit
with the X-1E[N 2] 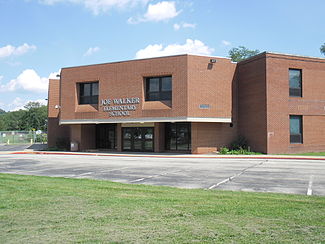 Walker was a charter member and one of the first Fellows of the Society of Experimental Test Pilots. He received the Robert J. Collier Trophy, the Harmon International Trophy for Aviators, the Iven C. Kincheloe Award, the John J. Montgomery Award, and the Octave Chanute Award. His alma mater awarded him an Honorary Doctor of Aeronautical Sciences degree in 1961. The National Pilots Association named him the Pilot of the Year in 1963.

Walker was inducted into the Aerospace Walk of Honor in 1991, and the International Space Hall of Fame in 1995. Joe Walker Middle School in Quartz Hill, California, is named in his honor as well as the Joe Walker Elementary School in Lagonda, Pennsylvania.