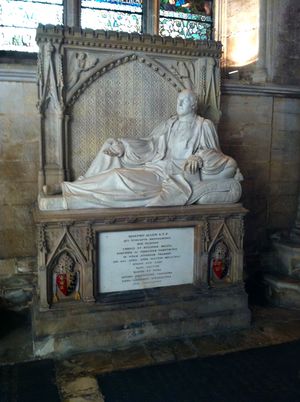 Allen was educated at the Free Grammar School, Manchester and at Trinity College, Cambridge where he subsequently appointed to a fellowship. He was ordained deacon in 1799 and priest in 1800. He was private secretary to the 2nd Earl Spencer and tutor to his son, the 3rd Earl Spencer, when Viscount Althorp. He was appointed a prebendary of Westminster Abbey on 4 October 1806[6] which appointment he held until 1836, vicar of Battersea in 1808 (Battersea was in the gift of Lord Spencer) and vicar of St Bride's, Fleet Street in 1829. The fact that Allen held more than one living at the same time was not uncommon in the eighteenth and nineteenth centuries.[5][7][8]

He was Bishop of Bristol from 1834 to 1836, when he was translated to become Bishop of Ely. He died in that office in 1845. There is a memorial to him in the South Choir Aisle of Ely Cathedral.

It was during Allen's episcopate (in 1837) that the Counties of Huntingdon and Bedford, and the Archdeaconry of Sudbury were added to the Diocese.