Joseph was born Giuseppe Buonaparte in 1768 to Carlo Buonaparte and Maria Letizia Ramolino at Corte, the capital of the Corsican Republic. In the year of his birth, Corsica was invaded by France and conquered the following year. His father was originally a follower of the Corsican Patriot leader, Pasquale Paoli, but later became a supporter of French rule.

As a lawyer, politician, and diplomat, Joseph served in the Cinq-Cents and was the French ambassador to Rome. On 30 September 1800, as Minister Plenipotentiary, he signed a treaty of friendship and commerce between France and the United States at Morfontaine, alongside Charles Pierre Claret de Fleurieu, and Pierre Louis Roederer.

He married Marie Julie Clary daughter of François Clary on 1 August 1794 in Cuges-les-Pins, France. They had three daughters:

He claimed the two surviving daughters as his heirs. He also sired two children with Maria Giulia, the Countess of Atri:

In 1795 Joseph was a member of the Council of Ancients, where he used his position to help his brother overthrow the Directory four years later.

The Château de Villandry had been seized by the French Revolutionary government; and, in the early 19th century, Joseph's brother, Emperor Napoleon, acquired the château for him. In 1806, Joseph was given military command of Naples, and shortly afterward was made king by Napoleon, to be replaced two years later by his sister's husband, Joachim Murat. Joseph was then made King of Spain in August 1808, soon after the French invasion. 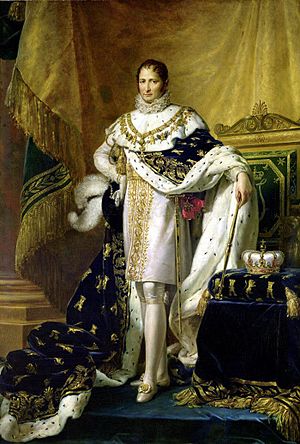 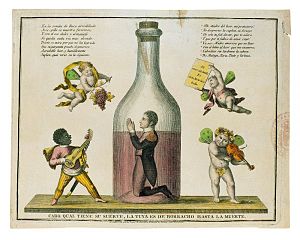 Joseph somewhat reluctantly left Naples, where he was popular, and arrived in Spain where he was very unpopular indeed. Joseph came under heavy fire from his opponents in Spain, who tried to smear his reputation by calling him Pepe Botella (Joe Bottle) for his alleged heavy drinking, an accusation echoed by later Spanish historiography, despite the fact that Joseph was abstemious. His arrival sparked the legitimate Spanish revolt against French rule, and the beginning of the Peninsular War. Thompson says the Spanish revolt was, "a reaction against new institutions and ideas, a movement for loyalty to the old order: to the hereditary crown of the Most Catholic kings, which Napoleon, an excommunicated enemy of the Pope, had put on the head of a Frenchman; to the Catholic Church persecuted by republicans who had desecrated churches, murdered priests, and enforced a "loi des cultes"; and to local and provincial rights and privileges threatened by an efficiently centralized government.[3]

Joseph temporarily retreated with much of the French Army to northern Spain. Feeling himself in an ignominious position, Joseph then proposed his own abdication from the Spanish throne, hoping that Napoleon would sanction his return to the Neapolitan Throne he had formerly occupied. Napoleon dismissed Joseph's misgivings out of hand; and, to back up the raw and ill-trained levies he had initially allocated to Spain—the Emperor sent heavy French reinforcements to assist Joseph in maintaining his position as King of Spain. Despite the easy recapture of Madrid, and nominal control by Joseph's government over many cities and provinces, Joseph's reign over Spain was always tenuous at best, and constantly resisted by pro-Bourbon guerrillas. Joseph and his supporters never established complete control over the country.

King Joseph's Spanish supporters were called josefinos or afrancesados (frenchified). During his reign, he ended the Spanish Inquisition, partly because Napoleon was at odds with Pope Pius VII at the time. Despite such efforts to win popularity, Joseph's foreign birth and support, plus his membership in a Masonic lodge,[4] virtually guaranteed he would never be accepted as legitimate by the bulk of the Spanish people. During Joseph's rule of Spain, Venezuela declared independence (1810) from Spain, the first nation to do so. The king had virtually no influence over the course of the ongoing Peninsular War: Joseph's nominal command of French forces in Spain was mostly illusory, as the French commanders theoretically subordinate to King Joseph insisted on checking with Napoleon before carrying out Joseph's instructions.

King Joseph abdicated and returned to France after the main French forces were defeated by the British at the Battle of Vitoria in 1813. He was seen by Bonapartists as the rightful Emperor of the French after the death of Napoleon's own son Napoleon II in 1832, although he did little to advance his claim.

Joseph lived primarily in the United States (where he sold the jewels he had taken from Spain) in the period 1817–1832,[5] initially in New York City and Philadelphia, where his house became the centre of activity for French expatriates, but later moved to an estate, formerly owned by Stephen Sayre, called Point Breeze in Bordentown, New Jersey. Joseph's home was located near the confluence of Crosswicks Creek and the Delaware River. He considerably expanded Sayre's home and created extensive gardens in the picturesque style. When his first home was destroyed by fire in January 1820 he converted his stables into a second grand house. At Point Breeze, Joseph entertained many of the leading intellectuals and politicians of his day

Reputedly some Mexican revolutionaries offered to crown him Emperor of Mexico in 1820, but he declined.[5]

Joseph Bonaparte returned to Europe, where he died in Florence, Italy, and was buried in the Les Invalides building complex in Paris.[6]

The romantic web between Joseph Bonaparte, Napoleon, Jean-Baptiste Bernadotte, Julie Clary and Désirée Clary was the subject of the 1951 novel Désirée, by Annemarie Selinko.

The novel was filmed as Désirée in 1954, with Marlon Brando as Napoleon, Jean Simmons as Désirée, and Cameron Mitchell as Joseph Bonaparte.