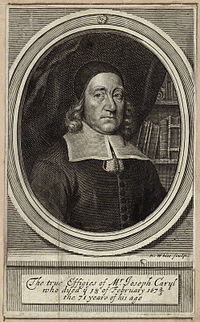 He was born in London, educated at Merchant Taylors' School, and graduated at Exeter College, Oxford, and became preacher at Lincoln's Inn. He frequently preached before the Long Parliament, and was a member of the Westminster Assembly in 1643. By order of the parliament he attended Charles I in Holmby House, and in 1650 he was sent with John Owen to accompany Cromwell to Scotland. In 1662, following the Restoration, he was ejected from his church of St. Magnus near London Bridge. He continued, however, to minister to an Independent congregation in London till his death in March 1673, when John Owen succeeded him.

Joseph Caryl married, and his daughter Elizabeth married the merchant Benjamin Shute; their child John Shute, the lawyer and theologian, was born at Theobalds, Essex. He changed his name, and became John Barrington, 1st Viscount Barrington.