From Infogalactic: the planetary knowledge core
Jump to: navigation, search
This article is about the Georgia governor. For the actor and comedian, see Joe E. Brown.

Joseph Emerson Brown (April 15, 1821 – November 30, 1894), often referred to as Joe Brown, was the 42nd Governor of Georgia from 1857 to 1865, and a U.S. Senator from 1880 to 1891. Governor Brown was a leading secessionist in 1861, taking his state out of the Union and into the Confederacy. A former Whig, and a firm believer in states' rights, he defied the national government's wartime policies. He resisted the Confederate military draft, and tried to keep as many soldiers at home as possible (to fight off invaders).[1] He denounced Confederate President Jefferson Davis as an incipient tyrant. Brown challenged Confederate impressment of animals, goods, and slaves. Several other governors followed his lead.

Brown was born 15 April 1821 in Pickens County, South Carolina to Mackey Brown and Sally (Rice) Brown. At a young age he moved with his family to Union County, Georgia.[2] In 1840, he decided to leave the farm and seek an education. Brown, with the help of his younger brother James and his father's plow horse, drove a yoke of oxen on a 125-mile trek to an academy near Anderson, South Carolina, where the impoverished Brown exchanged the oxen for eight months' board and lodging. In 1844, Brown moved to Canton, Georgia, where he served as head-master of the academy at Canton. He went on to study law, and in 1847, he opened a law office in Canton.

Brown was elected to the Georgia state senate in 1849 and soon became a leader of the Democratic Party in Georgia. He was elected state circuit court judge in 1855 and governor in 1857. As governor, he diverted state railroad profits to Georgia's public schools. He became a strong supporter of secession from the United States after Lincoln's election and South Carolina's secession in 1860, lamenting that not doing so would result in the ending of slavery in the United States. He called upon Georgians to oppose the efforts of people towards ending slavery:

Once the Confederacy was established, Brown, a states' rights advocate, spoke out against expansion of the Confederate central government's powers. He denounced Davis in particular. Brown even tried to stop Colonel Francis Bartow from taking Georgia troops out of the state to the First Battle of Bull Run. He objected strenuously to military conscription by the Confederacy.[4]

The capture of Milledgeville

After the fall of Atlanta, Union General William Tecumseh Sherman began his March to the Sea. The route, from Atlanta to Savannah took the left wing of Sherman's army to the city of Milledgeville, Georgia's state capitol. As U.S. troops closed in on the city, and with the fall of Milledgeville imminent, Governor Brown ordered Quartermaster General Ira Roe Foster to remove the state records. The task proved to be difficult, undertaken in the midst of chaos as U.S. troops closed in on the city.

Gov. Brown, thinking first of the valuable and perishable State property, ordered Gen. Ira Foster, Georgia's quartermaster general (who was always prompt and efficient), to secure its removal. Some of the books and other similar property were stored in the Lunatic Asylum, three miles out of town. A train of cars was held at the depot to carry off other State property, and Gen. Foster made herculean efforts to carry out the Governor's orders, but, such was the general terror and the rush to leave town, it was next to impossible to procure labor.

When the Governor saw the condition of affairs, he went to the penitentiary, had the convicts drawn up in a line, and made them a short speech; he appealed to their patriotic pride and offered pardon to each one who would help remove the State property and then enlist for the defense of Georgia. They responded promptly, were put under the command of Gen. Foster, and did valuable service in loading the train. When that was done each one was given a suit of gray, and a gun, and they were formed into a military company of which one of their number was captain. They were ordered to report for duty to Gen. Wayne, who was commanding a small battalion of militia at Milledgeville and also the Georgia cadets from the Military Institute at Marietta.

After the loss of Atlanta, Brown withdrew the state's militia from the Confederate forces to harvest crops for the state and the army.[6] When Union troops under Sherman overran much of Georgia in 1864, Brown called for an end to the war.

After the war, Brown was briefly held as a political prisoner in Washington, D.C. He was chief justice of the Supreme Court of Georgia from 1865 to 1870, when he resigned to become president of the Western and Atlantic Railroad. He supported President Andrew Johnson's Reconstruction policy, even becoming a Republican "scalawag" for a time. After Reconstruction, he became a Democrat again and was elected to the U.S. Senate in 1880 by the state legislature, according to the laws of the time. Soon after his election to the Senate, Brown became the first Georgia official to support public education for all children—not a popular position at the time. He was re-elected in 1885, but retired in 1891 due to poor health.[2]

While Brown's political supporters claimed that he "came to Atlanta on foot with less than a dollar in his pocket after the war and...made himself all that he is by honest and laborious methods",[7] most of his enterprises stemmed from his political connections. He amassed a fortune, in part through the use of convicts leased from state, county and local government in his coal mining operations in Dade County.[8] His use of leased labor began in 1874 and continued until his death in 1894, a period that coincided with "the high tide of the convict lease system in Georgia". Brown did not originate the convict lease system, while Governor. Nor was it a creation of the Confederacy. The convict lease system was authorized during the period of Reconstruction, under military governor and Union general Thomas H. Ruger who issued the first convict lease in April 1868. In 1880 Brown, whose fortune could be estimated conservatively at one million dollars, netted $98,000 from the Dade Coal Company. By 1886, Dade Coal was a parent company, owning Walker Iron and Coal, Rising Fawn Iron, Chattanooga Iron, and Rogers Railroad and Ore Banks and leasing Castle Rock Coal Company. An 1889 reorganization resulted in the formation of the Georgia Mining, Manufacturing and Investment Company. This rested largely on a foundation of convict labor.”[9]

Brown ran his mines with convict labor. A legislative committee visiting the sites, the same year that Brown sold them, said the prisoners were 'in the very worst condition...actually being starved and have not sufficient clothing...treated with great cruelty.' Of particular note to the visiting officials was that the mine claimed to have replaced whipping with the water cure torture—in which water was poured into the nostrils and lungs of the prisoners—because it allowed miners to 'go to work right away' after punishment.[10] It is not clear if these practices were in place at the time that Brown sold the mine, or were instituted by the mine's new owner (Hurt). 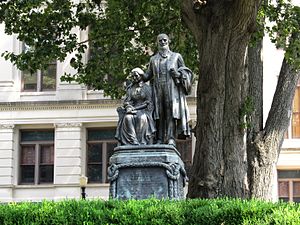 Joseph E. Brown died on November 30, 1894 in Atlanta, Georgia. His statue, in which he is accompanied by his wife, is on the grounds of the State Capitol, in Atlanta, and his towering tombstone is in Oakland Cemetery.

Joseph E. Brown Hall on the campus of the University of Georgia in Athens is named in his honor. The building was completed in 1932.

In her novel "Gone with the Wind", Margaret Mitchell made reference to Governor Brown, and the reception that "Joe Brown's Pets" received during General Sherman's march through Georgia in 1864: Yes, Governor Brown's darlings are likely to smell powder at last, and I imagine most of them will be much surprised. Certainly they never expected to see action. The Governor as good as promised them they wouldn't. Well, that's a good joke on them. They thought they had bomb proofs because the Governor stood up to even Jeff Davis and refused to send them to Virginia. Said they were needed for the defense of their state. Who'd have ever thought the war would come to their own back yard and they'd really have to defend their state?[11]