Highmore was born in London, the third son of Edward Highmore, a coal merchant, and nephew of Thomas Highmore, Serjeant Painter to William III. He displayed early ability but was discouraged by his family. At the ending of a clerkship at the age of 17, he abandoned law and started to work as a painter. On the revival of the Order of the Bath in 1725, he was selected to paint the knights in full costume. The years 1732 to 1734 were spent on a tour of the Netherlands and France and on his return to England, he applied himself to perfecting his talent, which continued for the next 50 years of his life, until his death, at the age of 87 on 3 March 1780.[1]

Highmore was buried in sheep's wool (to comply with a 17th-century statute to encourage the wool trade) in the fifth bay of the south aisle of Canterbury Cathedral.[1]

His wife Susanna Highmore (née Hiller) was a poet, though little of her work was published. His son Anthony Highmore (1719–99) was an artist, one of whose 15 children, Anthony Highmore Jnr. (1758–1829), became a writer on legal affairs and a social activist.[1] 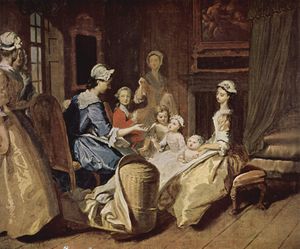 In 1744, he painted a series of 12 illustrations to Samuel Richardson's Pamela, or Virtue Rewarded - these were engraved by Benoist and Louis Truchy.[1]

As an author, he was best known for the works Critical Examination of Reubens' two Paintings in the Banqueting House and Observations on Bodwell's Pamphlet against Christianity.[1]