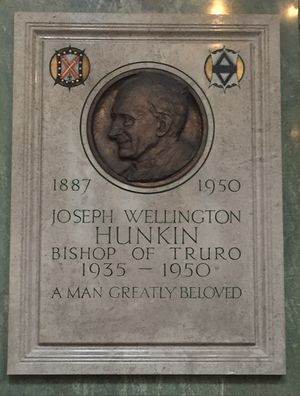 He was born on 25 September 1887 at Truro and educated at Truro College,[5] the Leys School and Gonville and Caius College, Cambridge. Ordained in 1914, he began his career with a curacy at St Andrew’s, Plymouth.[6] He was then a Chaplain in the British Armed Forces during World War I [7] and after that Dean of his old college. From 1927 until his ascension to the Episcopate he was Archdeacon of Coventry[8] and an Honorary Chaplain to the King. In 1938 he volunteered to be chaplain to the British Legion Volunteer Police Force.[9]

He died on 28 October 1950.[10] He was a strong Evangelical and noted for his pastoral work.[11] He was the chair of a commission to produce a new English translation of the Bible from 1948 to 1950. Hunkin used as his pastoral staff a shepherd's crook of iron with a wooden shaft bound with a silver band inscribed "Un para, un bugel" (Cornish for "One flock, one shepherd") and humbly enlisted in the Home Guard during World War II. A keen gardener, he was commemorated by a garden in the cathedral close and a shrub donated to every parish.[12]

Among his published works was Is it Reasonable to Believe?; London : Hodder & Stoughton, 1935. In 2001 a collection of newspaper articles by him was published, edited by the Revd. Douglas Pett: From a Cornish Bishop's Garden; edited with an introduction by Douglas Ellory Pett. 2001. Penzance: Alison Hodge[13]