Joseph Lister, 1st Baron Lister Bt OM PC FRS (5 April 1827 – 10 February 1912), known as Sir Joseph Lister, Bt., between 1883 and 1897, was a British surgeon and a pioneer of antiseptic surgery. By applying Louis Pasteur's advances in microbiology, he promoted the idea of sterile portable ports while working at the Glasgow Royal Infirmary. Lister successfully introduced carbolic acid (now known as phenol) to sterilise surgical instruments and to clean wounds, which led to a reduction in post-operative infections and made surgery safer for patients.

Lister came from a prosperous Quaker home in West Ham, Essex, England, a son of Joseph Jackson Lister, a pioneer of achromatic object lenses for the compound microscope. 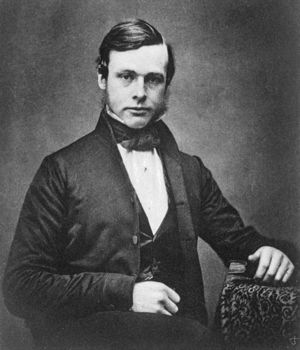 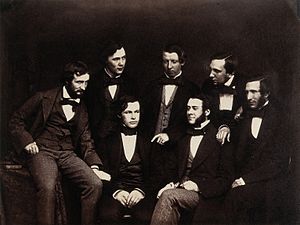 Lister with fellow Residents at the Old Royal Infirmary, Edinburgh, c.1855 (Lister is in the front row with his hands clasped)

He attended University College, London,[2] one of only a few institutions which accepted Quakers at that time. He initially studied botany and obtained a bachelor of Arts degree in 1847.[3] He registered as a medical student and graduated with honours as Bachelor of Medicine, subsequently entering the Royal College of Surgeons at the age of 26. In 1854, Lister became both first assistant to and friend of surgeon James Syme at the University of Edinburgh, Edinburgh Royal Infirmary in Scotland.

In 1867, Lister championed the use of carbolic acid as an antiseptic, such that it became the first widely used antiseptic in surgery. He first suspected it would prove an adequate disinfectant because it was used to ease the stench from fields irrigated with sewage waste. He presumed it was safe because fields treated with carbolic acid produced no apparent ill-effects on the livestock that later grazed upon them. He subsequently left the Quakers, joined the Scottish Episcopal Church, and eventually married Syme's daughter, Agnes.[4] On their honeymoon, they spent 3 months visiting leading medical institutes (hospitals and universities) in France and Germany. By this time, Agnes was enamoured of medical research and was Lister's partner in the laboratory for the rest of her life.

Until Lister's studies of surgery, most people believed that chemical damage from exposures to bad air was responsible for infections in wounds. Hospital wards were occasionally aired out at midday as a precaution against the spread of infection via miasma, but facilities for washing hands or a patient's wounds were not available. A surgeon was not required to wash his hands before seeing a patient because such practices were not considered necessary to avoid infection. Despite the work of Ignaz Semmelweis and Oliver Wendell Holmes, Sr., hospitals practiced surgery under unsanitary conditions. Surgeons of the time referred to the "good old surgical stink"[5] and took pride in the accumulated stains on their unwashed operating gowns as a display of their experience.

While he was a professor of surgery at the University of Glasgow, Lister became aware of a paper published by the French chemist, Louis Pasteur, showing that fermentation and food spoilage could occur under anaerobic conditions if micro-organisms were present. Pasteur suggested three methods to eliminate the micro-organisms responsible: filtration, exposure to heat, or exposure to solution/chemical solutions. Lister confirmed Pasteur's conclusions with his own experiments and decided to use his findings to develop "antiseptic" techniques for wounds. As the first two methods suggested by Pasteur were inappropriate for the treatment of human tissue, Lister experimented with the third. 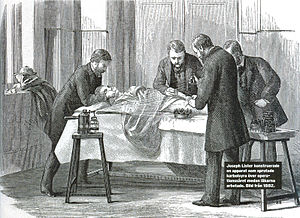 In 1834, Friedlieb Ferdinand Runge discovered phenol, also known as carbolic acid, which he derived in an impure form from coal tar. At that time, there was uncertainty between the substance of creosote – a chemical had been used to treat the wood used for railway ties and ships since it protected the wood from rotting – and carbolic acid.[6] Upon hearing that creosote had been used for treating sewage, Lister began to test the efficacy of carbolic acid when applied directly to wounds.[7] 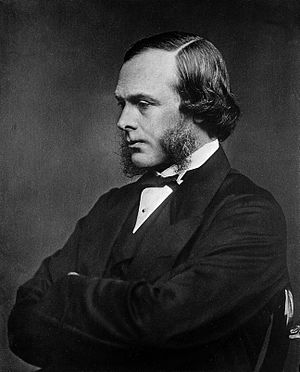 Joseph Lister in his youth

Therefore, Lister tested the results of spraying instruments, the surgical incisions, and dressings with a solution of carbolic acid. Lister found that the solution swabbed on wounds remarkably reduced the incidence of gangrene.[8] In August 1865, Lister applied a piece of lint dipped in carbolic acid solution onto the wound of a seven-year-old boy at Glasgow Infirmary, who had sustained a compound fracture after a cart wheel had passed over his leg. After four days, he renewed the pad and discovered that no infection had developed, and after a total of six weeks he was amazed to discover that the boy's bones had fused back together, without the danger of suppuration. He subsequently published his results in The Lancet[9][10] in a series of 6 articles, running from March through July 1867.

He instructed surgeons under his responsibility to wear clean gloves and wash their hands before and after operations with 5% carbolic acid solutions. Instruments were also washed in the same solution and assistants sprayed the solution in the operating theatre. One of his additional suggestions was to stop using porous natural materials in manufacturing the handles of medical instruments.[11]

Lister left Glasgow in 1869, returning to Edinburgh as successor to Syme as Professor of Surgery at the University of Edinburgh and continued to develop improved methods of antisepsis and asepsis. Amongst those he worked with there, who helped promulgate his work, was the senior apothecary and later MD, Dr Alexander Gunn. Lister's fame had spread by then, and audiences of 400 often came to hear him lecture. As the "germ theory of disease" became more widely accepted, it was realised that infection could be better avoided by preventing bacteria from getting into wounds in the first place. This led to the rise of sterile surgery. On the centenary of his death, in 2012, Lister was considered by most in the medical field as "the father of modern surgery".[7]

Lister moved from Scotland to King's College Hospital, in London. In 1881 he was elected President of the Clinical Society of London.[12] He also developed a method of repairing kneecaps with metal wire and improved the technique of mastectomy. 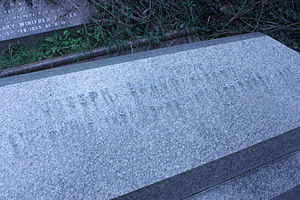 Lister retired from practice after his wife, who had long helped him in research, died in 1893 in Italy, during one of the few holidays they allowed themselves. Studying and writing lost appeal for him and he sank into religious melancholy. Despite suffering a stroke, he still came into the public light from time to time. On 24 August 1902 Edward VII came down with appendicitis two days before his scheduled coronation. Like all internal surgery at the time, the appendectomy needed by the King still posed an extremely high risk of death by post-operational infection, and surgeons did not dare operate without consulting Britain's leading surgical authority. Lister obligingly advised them in the latest antiseptic surgical methods (which they followed to the letter), and the King survived, later telling Lister, "I know that if it had not been for you and your work, I wouldn't be sitting here today."

Lister died on 10 February 1912 at his country home in Walmer, Kent at the age of 84. After a funeral service at Westminster Abbey, he was buried at West Hampstead Cemetery, London in a plot to the south-east of central chapel. Both the baronetcy and barony became extinct on his death.

Lister was president of the Royal Society between 1895 and 1900. Following his death, a Memorial Fund led to the founding of the Lister Medal, seen as the most prestigious prize that could be awarded to a surgeon.

His discoveries were greatly praised and in 1883 Queen Victoria created him a Baronet, of Park Crescent in the Parish of St Marylebone in the County of Middlesex.[13] In 1897 he was further honoured when Her Majesty raised him to the peerage as Baron Lister, of Lyme Regis in the County of Dorset.[14][15] He also became one of the twelve original members of the Order of Merit and a Privy Councillor in King Edward's Coronation Honours in 1902.[16]

Two postage stamps were issued in September 1965 to honour Lister for his contributions to antiseptic surgery. 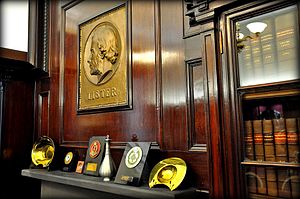 Lister Room, The Royal College of Physicians and Surgeons of Glasgow, Scotland

Lister is one of the two surgeons in the United Kingdom who have the honour of having a public monument in London. Lister's stands in Portland Place; the other surgeon is John Hunter. There is a statue of Lister in Kelvingrove Park, Glasgow, celebrating his links with the city.

A building at Glasgow Royal Infirmary which houses cytopathology, microbiology and pathology departments was named in his honour to recognise his work at the hospital.

Lister Hospital in Stevenage, Hertfordshire, England is named in honour of Lister.

The Discovery Expedition of 1901–04 named the highest point in the Royal Society Range, Antarctica, Mount Lister.[18]

In 1879, Listerine mouthwash was named after him for his work in antisepsis. Microorganisms named in his honour include the pathogenic bacterial genus Listeria named by J.H.H. Pirie, typified by the food-borne pathogen Listeria monocytogenes, as well as the slime mould genus Listerella, first described by Eduard Adolf Wilhelm Jahn in 1906.

He is depicted in the Academy Award winning 1936 film, The Story of Louis Pasteur, by Halliwell Hobbes. In the film, Lister is one of the beleaguered microbiologist's most noted supporters in the otherwise largely hostile medical community and is the key speaker in the ceremony in his honour.