Allen is married to the former Bonnie Jo Darling of Elkhart, Indiana. Their children are David Christopher, born September 1968 and Elizabeth Darling, born May 1972.

Allen was born in Crawfordsville, Indiana, on June 27, 1937. His parents, Mr. and Mrs. Joseph P. Allen III, reside in Frankfort, Indiana. He attended Mills School, and is a graduate of Crawfordsville High School in Indiana, class of 1955; received a Bachelor of Arts degree in Mathematics and Physics from DePauw University in 1959, where he was a member of The Delta Chapter of Beta Theta Pi,[1] and a Master of Science degree, and a Doctor of Philosophy degree in Physics from Yale University in 1961 and 1965, respectively.

Allen was a research associate in the Nuclear Physics Laboratory at the University of Washington prior to his selection as an astronaut. He was a staff physicist at the Nuclear Structure Laboratory at Yale University in 1965 and 1966, and during the period 1963 to 1967, served as a guest researcher at Brookhaven National Laboratory.

From August 1975 to 1978, Allen served as NASA Assistant Administrator for Legislative Affairs in Washington, D.C. Returning to the Johnson Space Center in 1978, as a senior scientist astronaut, Allen was assigned to the Operations Mission Development Group. He served as a support crew member for the first orbital flight test of the Space Shuttle (Columbia) in April 1981 and was the CAPCOM during the reentry phase for this mission. In addition, in 1980 and 1981, he worked as the technical assistant to the director of flight operations.[2]

Allen served as mission specialist on STS-5, the first fully operational flight of the Shuttle Transportation System, which launched from Kennedy Space Center, Florida, on November 11, 1982. He was accompanied by Vance D. Brand (spacecraft commander), Col. Robert F. Overmyer (pilot), and Dr. William B. Lenoir (mission specialist). STS-5, the first mission with four crewmembers, clearly demonstrated the Space Shuttle as fully operational by the successful first deployment of two commercial communications satellites from the Orbiter's payload bay. The mission marked the first use of the Payload Assist Module (PAM-D), and its new ejection system. Numerous flight tests were performed throughout the mission to document Shuttle performance during launch, boost, orbit, atmospheric entry and landing phases. STS-5 was the last flight to carry the Development Flight Instrumentation (DFI) package to support flight testing. A Getaway Special, three Student Involvement Projects, and medical experiments were included on the mission. A planned spacewalk by Allen and Lenoir, the first of the Space Shuttle program, was postponed by one day after Lenoir became ill, and then had to be cancelled when the two spacesuits that were to be used developed problems.[3] The STS-5 crew successfully concluded the 5-day orbital flight of Space Shuttle Columbia with the first entry and landing through a cloud deck to a hard-surface runway and demonstrated maximum braking. STS-5 completed 81 orbits of the Earth in 122 hours before landing on a concrete runway at Edwards Air Force Base, California, on November 16, 1982. 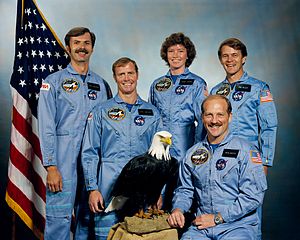 Allen (standing at right) with the crew of STS-51-A.

Allen was a mission specialist on STS 51-A, which launched from Kennedy Space Center, Florida, on November 8, 1984. He was accompanied by Captain Frederick (Rick) Hauck (spacecraft commander), Captain David M. Walker (pilot), and fellow mission specialists, Dr. Anna L. Fisher and Commander Dale Gardner. This was the second flight of the Orbiter Discovery. During the mission the crew deployed two satellites, Canada's Anik D-2 (Telesat H) and Hughes' LEASAT-1 (Syncom IV-1), and operated the 3M Company's Diffusive Mixing of Organic Solutions experiment. In the first space salvage attempt in history, Allen and Gardner performed spacewalks and successfully retrieved for return to Earth the Palapa B-2 and Westar VI communications satellites. STS 51-A completed 127 orbits of the Earth in 192 hours before landing at Kennedy Space Center, Florida, on November 16, 1984. With the completion of this flight Allen logged a total of 314 hours in space.

Allen served as chief executive officer of Space Industries International, Washington, D.C., and later was chairman of Veridian, until he retired in 2004. General Dynamics announced its acquisition of Veridian on June 9, 2003.

In the 1998 miniseries From the Earth to the Moon Allen was played by Doug McKeon.

Allen was a contributor to the book NASA's Scientist-Astronauts by David Shayler and Colin Burgess.