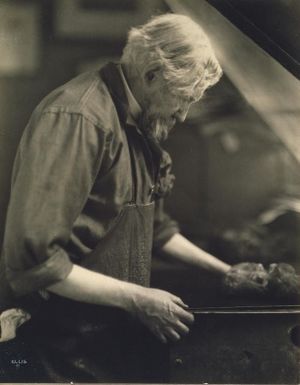 Born in Philadelphia, and first studied there, but like his compatriot and friend, James McNeill Whistler, he afterwards went to Europe and made his home in London. Joseph Pennell had many etchings that depicted historic landmarks in the city of Philadelphia. His etching of Wakefield- Fisher’s Lane was created in 1882. This was the mansion of William Logan Fisher which was standing until 1985. It would have been located on the corner of Ogontz and Lindley Avenues near La Salle University's St. Basil Court.[1] He produced numerous books (many of them in collaboration with his wife, Elizabeth Robins Pennell), but his chief distinction is as an original etcher and lithographer, and notably as an illustrator. Their close acquaintance with Whistler led the Pennells to undertake a biography of that artist in 1906, and, after some litigation with his executrix on the right to use his letters, the book was published in 1908.[2]

He taught at Slade School of Art. He won a gold medal at the Exposition Universelle (1900), and 1904 Louisiana Purchase Exposition.[3] 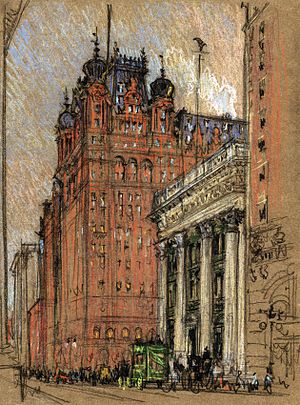 The Waldorf-Astoria at the original location, Fifth Avenue and Thirty-Fourth Street. Charcoal and pastel on brown paper by Joseph Pennell, c. 1904-1908.

Pennell visited San Francisco in March 1912, where he undertook a series of so-called "municipal subjects". These were exhibited in December 1912 at "the prestigious gallery of Vickery, Atkins & Torrey", according to Mary Millman and Dave Bohn, authors of The Master of Line: John W. Winkler, American Etcher , (Capra Press: Santa Barbara, CA, 1994). It is possible that Pennell's visit inspired San Francisco printmakers Robert Harshe and Pedro Lemos, along with sculptor Ralph Stackpole and painter Gottardo Piazzoni, to found the California Society of Etchers in 1912, now the California Society of Printmakers. Longtime members of California Society of Printmakers believe that Pennell was a member of the New York Etchers Club, established in 1877, although his membership in the New York Etchers Club is not confirmed. 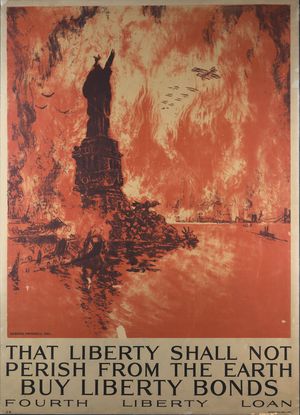 That Liberty Shall Not Perish from the Earth (1918)

Pennell did the poster for the fourth Liberty Loans campaign of 1918. It showed the entrance to New York City's New York Harbor under aerial and naval bombardment, with New York in flames and the Statue of Liberty partly destroyed, her head and her torch blown off.[4] He taught at the Art Students League of New York.[3]

In 1880 Joseph Pennell created Little Wakefield which is an etching of the Little Wakefield estate.[5] It is a 'small' home that is located on what is now South Campus of La Salle University, currently called St. Mutiens hall. This estate was built by Thomas Fisher in 1829 and was occupied by his families for generations however, it is now currently the residence of the Christian Brothers of the University.[6] The etching of the estate created by Pennell was created almost fifty years after the house was built. It depicts the house lived in by the second generation of Fishers and it was a time where money was extremely scarce. Little Wakefield has served multiple purposes besides just residency. During World War I it was used as demonstration center for a local branch of the National League of Women's Service. Little Wakefield was also the location where Thomas R. Fisher ran the first knitting factory in America. [7]