Joseph Wright (3 September 1734 – 29 August 1797), styled Joseph Wright of Derby, was an English landscape and portrait painter. He has been acclaimed as "the first professional painter to express the spirit of the Industrial Revolution".[1]

Wright is notable for his use of chiaroscuro effect, which emphasises the contrast of light and dark, and for his paintings of candle-lit subjects. His paintings of the birth of science out of alchemy, often based on the meetings of the Lunar Society, a group of very influential scientists and industrialists living in the English Midlands, are a significant record of the struggle of science against religious values in the period known as the Age of Enlightenment.

Many of Wright's paintings and drawings are owned by Derby City Council, and are on display at the Derby Museum and Art Gallery. 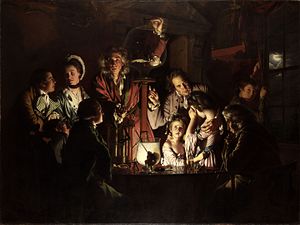 An Experiment on a Bird in the Air Pump, by Joseph Wright, 1768, National Gallery, London[2]

Joseph Wright was born in Irongate, Derby. Deciding to become a painter, Wright went to London in 1751 and for two years studied under Thomas Hudson, the master of Joshua Reynolds. After painting portraits for a while at Derby, Wright again worked as an assistant to Hudson for fifteen months. In 1753 he returned to and settled in Derby and varied his work in portraiture by the production of the subjects with strong chiaroscuro under artificial light, with which his name is chiefly associated, and by landscape painting. Wright also spent a productive period in Liverpool, from 1768 to 1771, painting portraits. These included pictures of a number of prominent citizens and their families. 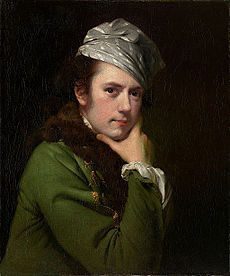 Self portrait as a young man

Wright and his wife had six children, three of whom died in infancy. Wright set off in 1773 with John Downman, a pregnant Ann Wright and Richard Hurleston for Italy. Their ship took shelter for three weeks in Nice before they completed their outward voyage in Livorno in Italy in February 1774.[4] Downman returned to Britain in 1775.[5] Although he spent a great deal of time in Naples, Wright never actually witnessed any eruption of Mount Vesuvius; however, it is possible that he witnessed smaller, less impressive eruptions, which may have inspired many of his subsequent paintings of the volcano.[6] On his return from Italy he established himself at Bath as a portrait-painter, but meeting with little encouragement he returned to Derby in 1777, where he spent the rest of his life. He became increasingly asthmatic and nervous about the house, and for these complaints he was treated by his friend Erasmus Darwin. Ann Wright died on 17 August 1790. On 29 August 1797 Wright died at his new home at No. 28 Queen Street, Derby, where he had spent his final months with his two daughters.[3]

Wright was a frequent contributor to the exhibitions of the Society of Artists, and to those of the Royal Academy, of which he was elected an associate in 1781 and a full member in 1784. He, however, declined the latter honour on account of a slight which he believed that he had received, and severed his official connection with the Academy, though he continued to contribute to the exhibitions from 1783 until 1794. 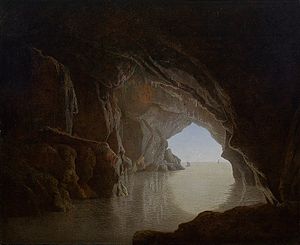 Cave at evening, (aka Grotto in the Gulf of Salerno) by Joseph Wright, 1774,
Smith College Museum of Art, Northampton, Massachusetts

Wright is seen at his best in his candlelit subjects of which the Three Persons Viewing the Gladiator by Candlelight (1765), his A Philosopher Lecturing on the Orrery (1766), in the Derby Museum and Art Gallery, and An Experiment on a Bird in the Air Pump (1768), in the National Gallery are excellent examples. His Old Man and Death (1774) is also a striking and individual production.

Joseph Wright of Derby also painted Dovedale by Moonlight, capturing the rural landscape of a narrow valley called Dovedale, 14 miles northeast of Wright's home town of Derby, at night with a full moon. It hangs in the Allen Memorial Art Museum at Oberlin College.[7] Its companion piece, Dovedale by Sunlight (circa 1784–1785) captures the colors of day. In another Moonlight Landscape, in the John and Mable Ringling Museum of Art, Sarasota Florida, equally dramatic, the moon is obscured by an arched bridge over water, but illuminates the scene, making the water sparkle in contrast to the dusky landscape. Another memorable image from his tour of the Lake District is Rydal Waterfall of 1795.

Cave at evening (above) is painted with the same dramatic chiaroscuro for which Joseph Wright is noted. The painting was executed during 1774, while he was staying in Italy. Notice the similarities to the Museum of Fine Arts, Boston's holding, Grotto by the Seaside in the Kingdom of Naples with Banditti, Sunset (1778).[8] 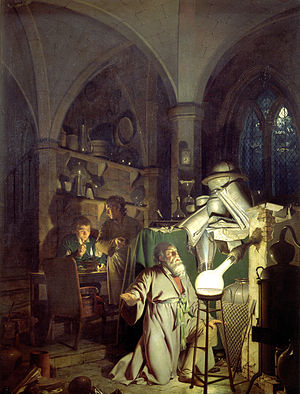 The Alchemist in Search of the Philosopher's Stone, by Joseph Wright, 1771

Wright had close contact with the pioneering industrialists of the Midlands. Two of his most important patrons were Josiah Wedgwood, credited with the industrialization of the manufacture of pottery, and Richard Arkwright, regarded as the creator of the factory system in the cotton industry. One of Wright's students, William Tate, was uncle to the eccentric gentleman tunneler Joseph Williamson and completed some of Wright's works after his death. Wright also had connections with Erasmus Darwin and other members of the Lunar Society, which brought together leading industrialists, scientists, and philosophers. Although meetings were held in Birmingham, Erasmus Darwin, grandfather of Charles Darwin, lived in Derby, and some of the paintings by Joseph Wright of Derby, which are themselves notable for their use of brilliant light on shade, are of, or were inspired by Lunar Society gatherings.

An Experiment on a Bird in the Air Pump (1768), shows people gathered round observing an early experiment into the nature of air and its ability to support life.

The Alchemist in Search of the Philosopher's Stone (1771) depicts the discovery of the element phosphorus by German alchemist Hennig Brand in 1669. A flask in which a large quantity of urine has been boiled down is seen bursting into light as the phosphorus, which is abundant in urine, ignites spontaneously in air.

A Philosopher Lecturing on the Orrery shows an early mechanism for demonstrating the movement of the planets around the sun. The Scottish scientist James Ferguson (1710–1776) undertook a series of lectures in Derby in July 1762[9][10] based on his book Lectures on Select Subjects in Mechanics, Hydrostatics, Pneumatics, Optics &c. (1760). To illustrate his lectures, Ferguson used various machines, models and instruments. Wright possibly attended these talks, especially as tickets were available from John Whitehurst, Wright's close neighbour, a clockmaker and a scientist. Wright could also have drawn on Whitehurst’s practical knowledge to learn more about the orrery and its operation. 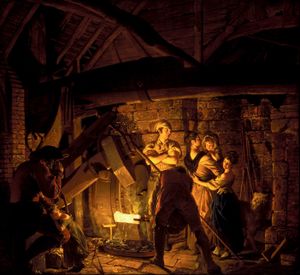 These factual paintings are considered to have metaphorical meaning too, the bursting into light of the phosphorus in front of a praying figure signifying the problematic transition from faith to scientific understanding and enlightenment, and the various expressions on the figures around the bird in the air pump indicating concern over the possible inhumanity of the coming age of science.[10] These paintings represent a high point in scientific enquiry which began undermining the power of religion in Western societies. Some ten years later, scientists would find themselves persecuted in the backlash to the French Revolution of 1789, itself the culmination of enlightenment thinking. Joseph Priestley, a member of the Lunar Society, left Britain in 1794 after his Birmingham laboratory was smashed and his house burned down by a mob objecting to his outspoken support for the French Revolution. In France, the chemist Antoine Lavoisier was executed by the guillotine at the height of the Terror. The politician and philosopher Edmund Burke, in his famous Reflections on the Revolution in France (1790), tied natural philosophers, and specifically Priestley, to the French Revolution; he later wrote in his Letter to a Noble Lord (1796) that radicals who supported science in Britain "considered man in their experiments no more than they do mice in an air pump".[11] In light of this comment, Wright's painting of the bird in the air pump, completed over twenty years earlier, seems particularly prescient.

It was against this background that Charles Darwin, grandson of the Derby man and Lunar Society member, Erasmus Darwin, would add to the conflict between science and religious belief half a century later, with the publication of his book The Origin of Species in 1859. 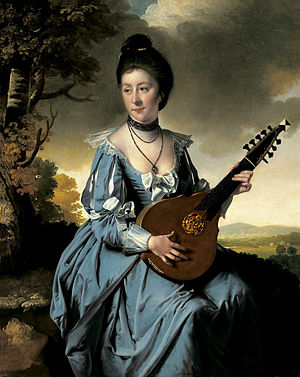 Wright's birthplace at 28 Irongate, Derby is commemorated with a representation of an orrery on the pavement nearby.

Joseph Wright was buried in the grounds of St Alkmund's Church, Derby. The church was controversially demolished in 1968 to make way for a major new section of the inner ring road cutting through the town centre, and now lies beneath the road. Wright's remains were removed to Nottingham Road Cemetery. In 1997 his tombstone was placed at the side of Derby Cathedral, and in 2002 it was brought inside and wall-mounted in a prominent place near the well-visited memorial to Bess of Hardwick. [12]

Wright's name has also been given to the 6th form centre situated on Cathedral Row, Derby (not far from Iron Gate). The Joseph Wright Centre was opened in 2005 as the new flagship site for Derby College. The building is named after the 18th-century painter because his "artwork captured the many scientific and technological advances of the Industrial Revolution."[13]