Josephine Elizabeth Butler (née Grey) (13 April 1828 – 30 December 1906) was a Victorian era British feminist and social reformer[1] who was especially concerned with the welfare of prostitutes. She was intensely religious as an evangelical Anglican. Along with other charity efforts, she led the long campaign for the repeal of the Contagious Diseases Acts both in Britain and internationally from 1869 to 1886 because the acts harmed and unfairly imprisoned young women who were suspected of being prostitutes.

Josephine Elizabeth Grey was born at Milfield House, Milfield, Northumberland[2][3][4] and was the seventh child of John Grey a land agent (1785–1868, b. Milfield, Northumberland) and Hannah Eliza Annett (b. 1792, Alnwick, d. 15 May 1860). The couple married in 1815.[5] John Grey, son of George Grey (d. 1793) and Mary Burn, was an agricultural expert, and cousin of the reformist British Prime Minister Charles Grey, 2nd Earl Grey. He was slavery abolitionist who played a significant role in Catholic emancipation, and also worked for the Reform Act 1832. In 1833 he was appointed manager of the Dilston Estate (Greenwich Hospital), near Corbridge, Northumberland, and the family moved there. He lost most of his savings in the fall of 1857, with the failure of the Newcastle Bank.[6]

Josephine married George Butler (1819–1890 b. Harrow, Middlesex), a scholar and cleric, in 1852. They shared an Evangelical approach to Christianity and a cultural attachment to Italy, as well as a strong commitment to liberal reforms. George Butler encouraged his wife in her public work, and he suffered set-backs in his own career on account of his wife's notoriety. She gave birth to four children: George Grey (b. 1852, Oxford); Arthur Stanley (b. 1854, Oxford); Charles Augustine Vaughan (1857, Clifton, Gloucestershire); Evangeline Mary (Eva)(1859–1864), Cheltenham].[7] The Butlers had strong radical sympathies, including support for the Union in the American Civil War.

Their only daughter, Eva died in 1863, following a fall from the staircase at their home.[8] This led Josephine to seek solace by ministering to people with greater pain than her own. She began visiting Liverpool's Brownlow Hill workhouse which led to her first involvement with prostitutes. She set up a House of Rest and an Industrial Home for them. [9] 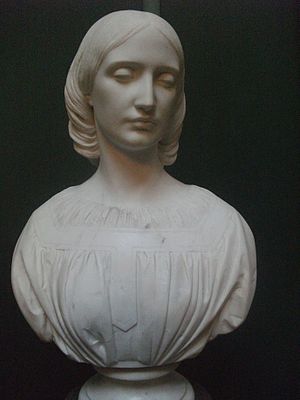 Bust of Josephine Butler in 1865, aged 36, by Alexander Munro 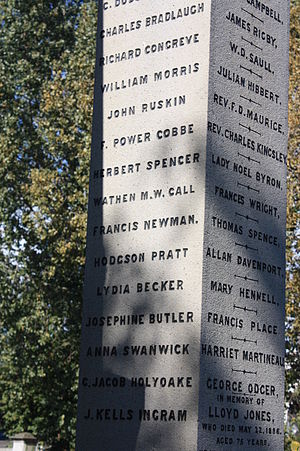 From her twenties on, Butler was very active in feminist movements. This was particularly spurred by the accidental death of her five-year-old daughter Eva in 1864 when the Butlers were living in Cheltenham, where George served as vice principal at Cheltenham College. In 1866 George Butler was appointed headmaster of Liverpool College, and the family moved to Liverpool. Josephine now became involved in the campaign for higher education for women, and in 1867 together with Anne Jemima Clough, later principal of Newnham College, Cambridge, she was instrumental in establishing the North of England Council for Promoting the Higher Education of Women. However, she had also been very closely involved with the welfare of prostitutes; as a passionate Christian, she abhorred the sin, but she also regarded the women as being exploited victims of male oppression, and she attacked the double standard of sexual morality. So when a national campaign was begun in 1869 to repeal the Contagious Diseases Acts, she was an obvious woman to lead it. 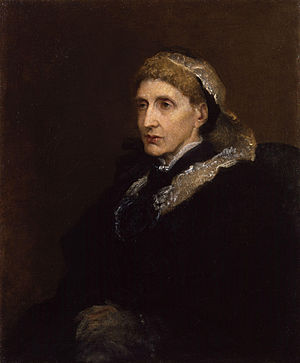 The Contagious Diseases Acts had been introduced during the 1860s (1864, 1866, 1869) as a form of state regulation of prostitution, to control the spread of venereal diseases, especially in the British Army and Royal Navy. This gave magistrates the power to order a genital examination of prostitutes for symptoms of VD, and detain infected women in a lock hospital for three months to be cured. Refusal to consent to the examination led to imprisonment. An accusation of prostitution by a police officer was sufficient to order an examination; women so accused often lost their livelihoods and, notoriously, one woman committed suicide.

Butler's description of this at a public meeting – she had been known to refer to the procedure as "surgical rape" – caused Hugh Price Hughes, Superintendent of the West London Mission, who was thanking her formally on the platform, to leave the stage in tears[10] – something most unusual in those days and commented upon widely at the time.

In 1885 she was drawn into another related campaign led by the campaigning editor of the Pall Mall Gazette, William Thomas Stead. He had published a series of articles entitled The Maiden Tribute of Modern Babylon exposing the extent of child prostitution in London. As a result of this campaign, the age of consent in the United Kingdom of Great Britain and Ireland was raised from 13 to 16 that same year.

Josephine was also very active in spreading the campaign internationally, and travelled to the French Third Republic and Switzerland where she met with hostility from the authorities, and strong support from feminist groups. As a result of her efforts, international organisations including the International Abolitionist Federation that she was a founder of, were set up to campaign against state regulation of prostitution and the traffic in women and children. Also, in 1897 in British Raj India, new Contagious Diseases Acts were imposed by the British government, and she led a new campaign against this.

Meanwhile, George had retired from Liverpool College and been made a Canon of Winchester Cathedral, and he died 14 March 1890. Josephine continued campaigning until the early 1900s, and died in 1906.

Josephine Butler was not only a vehement feminist but a passionate Christian; she once said "God and one woman make a majority". She is now considered to have invented many of the strategies that would later be used by the suffragettes and it has even been argued that her alliance with the "new journalism" of W.T. Stead initiated the methods of sociological enquiry.[12] In the Church of England she is celebrated with a Lesser Festival on 30 May and 30 December. She is also represented in windows in Liverpool's Anglican Cathedral, and St Olave's Church in the City of London.

In 2005, the University of Durham honoured her by naming Josephine Butler College for her. This reflects the fact that she was married to a Durham University lecturer, and was a local of the North-East.[14] 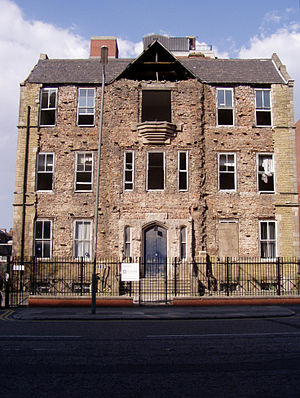 Her connections to the UK city of Liverpool were also once memorialised. One of the "Faculty of Business and Law" buildings of Liverpool John Moores University was named "Josephine Butler House". The building (previously the first Radium Institute in the UK), at the centre of the Cultural Quarter, Hope Street, Liverpool, and which dated back to 1867, was demolished in 2013 for the site to become a car park[15] and subsequently student housing due to open in 2015. [16] Josephine Butler's house in Cheltenham, The Priory in London Road, was demolished in the 1970s. However, there remains a blue plaque on the apartment building which now occupies the site.

Her name is listed on the south side of the Reformers Memorial in Kensal Green Cemetery in London.

The archives of Josephine Butler are held at The Women's Library at the Library of the London School of Economics, ref 3JBL There are also important collections at the University of Liverpool, [1] and the Northumberland Archives, Woodhorn, Ashington, Northumberland. [2]