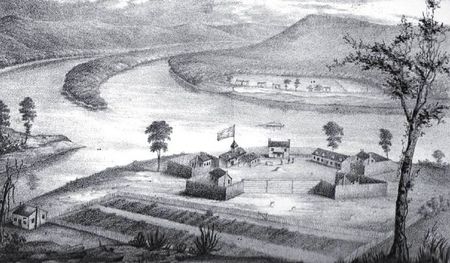 Josiah Harmar (November 10, 1753 – August 20, 1813) was an officer in the United States Army during the American Revolutionary War and the Northwest Indian War. He was the senior officer in the Army for seven years.

Harmar was born in Philadelphia, Pennsylvania and educated at a Quaker school. He started his military career during the American Revolutionary War, receiving a commission as a captain in 1775. He served under George Washington and Henry Lee during the war. A lieutenant colonel at its conclusion, he was chosen by Congress in 1784 to relay the ratified Treaty of Paris (1783) to commissioner Benjamin Franklin in Paris.

As commander of the First American Regiment, Harmar was the senior officer in the United States Army from 1784 to 1791. He signed the Treaty of Fort McIntosh in 1785, the same year that he ordered the construction of Fort Harmar near Marietta, Ohio. He also supervised the construction of Fort Steuben near present-day Steubenville, Ohio. Harmar was brevetted brigadier general in July 1787.[1] He directed the construction in 1789 of Fort Washington on the Ohio River, which was built to protect the southern settlements in the Northwest Territory. The fort was named in honor of President Washington.

In 1790, Harmar was sent on expeditions against Native Americans and remaining British in the Northwest Territory. After a few initial military successes, his force of Federal troops was defeated by a tribal coalition led by Little Turtle, in an engagement known as the "Harmar's defeat", "Battle of the Maumee", Battle of Kekionga", or "Battle of the Miami Towns".

Later, Harmar returned with a somewhat larger force and engaged the coalition, but fought to a draw. Consequently, he was relieved of this command and replaced by General Arthur St. Clair. Harmar was subsequently court-martialed, at his own request, on various charges of negligence, and exonerated by a court of inquiry.[2]

After his retirement from the Army in 1792, Harmar served as adjutant general of Pennsylvania (1793–1799). He died near Philadelphia at his estate, "The Retreat." He is buried at the Episcopal Church of St. James, Kingsessing, in West Philadelphia.[4]