Journal Media Group (formerly Journal Communications) is a Milwaukee, Wisconsin-based newspaper publishing company. The company's roots were first established in 1882 as the owner of its namesake, the Milwaukee Journal, and expanded into broadcasting with the establishment of WTMJ radio and WTMJ-TV, and the acquisition of other television and radio stations.

On April 1, 2015, the E.W. Scripps Company acquired Journal Communications, and spun out the publishing operations of both Scripps and Journal into a new company known as Journal Media Group. It is led by Timothy E. Stautberg—the former head of Scripps' newspaper business, joined by previous Journal CEO Stephen J. Smith as a chairman. 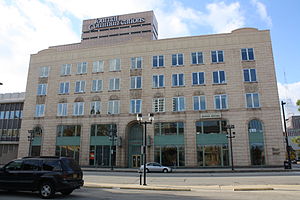 The Milwaukee Journal was started in 1882, in competition with four other English-language, four German- and two Polish-language dailies. It launched WTMJ-AM (620) in 1927, and WTMJ-TV (Channel 4) in 1947. The Journal Company, until then primarily owned by local interests, introduced an employee stock trust plan in 1937, and as a result most Journal stock was eventually held by its employees (under certain restrictions). A small bloc of Journal stock was given to Harvard to fund the Nieman Fellowship program for promising journalists, and another bloc was still held by the original owning families until the IPO.

The Milwaukee Sentinel, begun in 1837 as a weekly published by city co-founder Solomon Juneau, passed through the hands of several owners before being sold to the Hearst Corporation in 1924. Hearst operated the Sentinel until 1962, when, following a long and costly strike, it abruptly announced the closing of the paper. Although Hearst claimed that the paper had lost money for years, The Journal Company, concerned about the loss of an important voice (and facing questions about its own dominance of the Milwaukee media market), agreed to buy the Sentinel name, subscription lists, and goodwill associated with the name. In 1995 the Journal and Sentinel were consolidated. The new Journal Sentinel then became a seven-day morning paper. In 1964, Journal Communications bought a part interest in Perry Printing, a commercial printer specializing in printing magazines, catalogs and free-standing inserts for publications.[2] A decade later, in 1974, it purchased the remaining shares of the company. In 1995, it sold the operation (which by then had about 1000 employees and sales of $123 million) to the Milhous Group of California.[3]

In 1968, the Midwestern Relay cable transmission division of the Journal Company was developed out of broadcast-related expertise; in 1991, Midwestern Relay acquired Norlight, a fiber-optic private carrier, and adopted the Norlight name. On February 26, 2007 Journal Communications sold the regional telecommunications provider to privately held Q-Comm Corp of Delaware. Upon closing the transaction, Q-Comm terminated Jim Ditter, who had been president of Norlight since 1995, and chief financial officer Mike Garvey. What is now known as the Journal Community Publishing Group began in Waupaca, Wisconsin in 1972 as a publishing and printing company called Add Inc. A majority interest was purchased by Journal Communications in 1981, and the remainder in 1986. In June 2007, Journal Communications sold off its JCP interests in Louisiana, Ohio, Connecticut and Vermont. The sales brought in a combined $30 million.[4]

The company sold 11 community newspapers, five shoppers and two printing plants in Connecticut and Vermont to Hersam Acorn Newspapers. In Ohio, Journal sold eight shoppers, numerous specialty print products and the Advantage Press commercial printing business to Gannett Company. It also sold its Louisiana-based publishing business to a Target Media Partners affiliate. In 1999 Journal Communications acquired the Great Empire radio group (13 radio stations in 4 states). The corporation had its initial public offering of Class A shares in 2003. For decades, Journal Communications been criticized[5][6] with concerns about being a media monopoly in the Milwaukee area. It created the now-defunct alternative papers MKE and ¡Aqui! Milwaukee to regain advertising dollars lost to local independents like the Shepherd Express and the Milwaukee Spanish Journal.[7]

On July 30, 2014, it was announced that Journal would be acquired by the E. W. Scripps Company in an all-stock transaction. Scripps would retain the two firms' broadcasting properties, while both the Scripps and Journal print properties would be spun off as Journal Media Group.[8] The FCC approved the deal on December 12, 2014, and it was approved by shareholders on March 11, 2015.[9] The merger and spin-off were finalized on April 1, 2015; Stephen J. Smith was replaced as CEO by Timothy E. Stautberg—the former head of Scripps' newspaper operation.[10] Although Journal Media Group is headquartered where Journal Communications was, the latter company is legally defunct, having been absorbed into Scripps and renamed "Desk BC Merger, LLC".[11]

On October 7, 2015, it was announced that the Gannett Company would acquire Journal Media Group for $280 million.[12]

Before its merger with Journal, the papers of E.W. Scripps were known for having several controversies within the newspapers it ran.

Hugo Zacchini performed a human cannonball act in 1972 at the Geauga County Fair in Burton, Ohio. Scripps television station WEWS-TV recorded and aired the entire act against his wishes and without compensating him, as was required by Ohio law. In Zacchini v. Scripps-Howard Broadcasting Co., the U.S. Supreme Court ruled that the First Amendment did not shield the broadcaster from liability from common law copyright claims.[13]

The Commercial Appeal posted a controversial database listing Tennessee residents with permits to carry handguns in 2008.[14] The database is a public record in Tennessee, but had not previously been posted online.

Scripps owns and operates the Ventura County Star, which has faced many complaints involving its circulation practices rather than its editorial content. As of April 2, 2011, the Better Business Bureau listed ten (10) separate "significant" complaints from the previous three years, of which two alleged the company made unauthorized debits from customers' checking accounts, four alleged problems obtaining refunds, two alleged the company harassed a customer or former customer, two alleged improper billing, and two alleged delivery continuing after customers tried to cancel.[15] (The total number of allegations does not add to the total number of complaints because two complaints made multiple allegations.)

In May 2013, Scripps News Service discovered and published a security breach on the websites of Oklahoma-based TerraCom Inc. and an affiliate, YourTel America Inc. in which the personal information of tens of thousands of low-income Americans was publicly exposed. In response, the two companies accused Scripps of "hacking" and of violations of the Computer Fraud and Abuse Act.[16][17] The Illinois Attorney General Lisa Madigan subsequently announced an investigation into the two companies.[18]