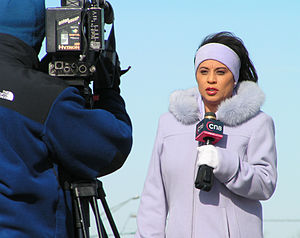 A television reporter holding a microphone in front of a cameraman. 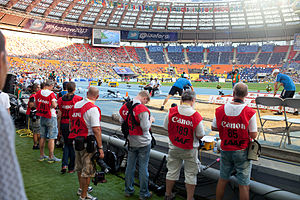 Photojournalists at the 2013 World Championships in Athletics. 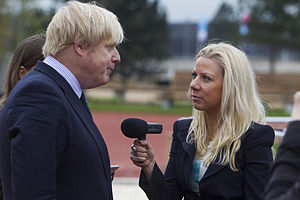 A journalist is a person who collects, writes, or distributes news or other current information. A journalist's work is called journalism. A journalist can work with general issues or specialize in certain issues, however, most journalists tend to specialize, and by cooperating with other journalists produce journals that span many topics.[1] For example, a sports journalist covers news within the world of sports, but this journalist may be a part of a newspaper that covers many different topics.

A reporter is a type of journalist who researches, writes, and reports on information to present in sources, conduct interviews, engage in research, and make reports. The information-gathering part of a journalist's job is sometimes called reporting, in contrast to the production part of the job such as writing articles. Reporters may split their time between working in a newsroom and going out to witness events or interview people. Reporters may be assigned a specific beat or area of coverage.

Depending on the context, the term journalist may include various types of editors, editorial writers, columnists, and visual journalists, such as photojournalists (journalists who use the medium of photography).

Journalism has developed a variety of ethics and standards. While objectivity and a lack of bias are of primary concern and importance, more liberal types of journalism, such as advocacy journalism and activism, intentionally adopt a non-objective viewpoint. This has become more prevalent with the advent of social media and blogs, as well as other platforms that are used to manipulate or sway social and political opinions and policies. These platforms often project extreme bias, as "sources" are not always held accountable or considered necessary in order to produce a written, televised or otherwise "published" end product.

Matthew C. Nisbet, who has written on science communication,[2] has defined a "knowledge journalist" as a public intellectual who, like Walter Lippmann, David Brooks, Fareed Zakaria, Naomi Klein, Michael Pollan, Thomas Friedman, and Andrew Revkin, sees their role as researching complicated issues of fact or science which most laymen would not have the time or access to information to research themselves, then communicating an accurate and understandable version to the public as a teacher and policy advisor.

Lippmann argued that most individuals lacked the capacity, time, and motivation to follow and analyze news of the many complex policy questions that troubled society. Nor did they often directly experience most social problems, or have direct access to expert insights. These limitations were made worse by a news media that tended to over-simplify issues and to reinforce stereotypes, partisan viewpoints, and prejudices. As a consequence, Lippmann believed that the public needed journalists like himself who could serve as expert analysts, guiding “citizens to a deeper understanding of what was really important.”[3] 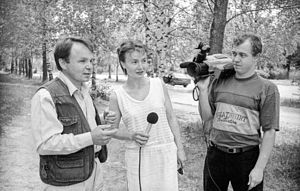 A program director sets the task for TV journalists

Journalists sometimes expose themselves to danger, particularly when reporting in areas of armed conflict or in states that do not respect the freedom of the press. Organizations such as the Committee to Protect Journalists and Reporters Without Borders publish reports on press freedom and advocate for journalistic freedom. As of November 2011, the Committee to Protect Journalists reports that 887 journalists have been killed worldwide since 1992 by murder (71%), crossfire or combat (17%), or on dangerous assignment (11%). The "ten deadliest countries" for journalists since 1992 have been Iraq (230 deaths), Philippines (109), Russia (77), Colombia (76), Mexico (69), Algeria (61), Pakistan (59), India (49), Somalia (45), Brazil (31) and Sri Lanka (30).[4]

Apart from the physical harm, journalists are harmed psychologically. This applies especially to war reporters. But their editorial offices at home often do not know how to deal appropriately with the reporters they expose to danger. Hence, a systematic and sustainable way of psychological support for traumatised journalists is strongly needed. However, only little and fragmented support-programmes do exist so far.[7]

The Newseum in Washington, D.C. is home to the Journalists Memorial, which lists the names of over 2,100 journalists from around the world who were killed in the line of duty.