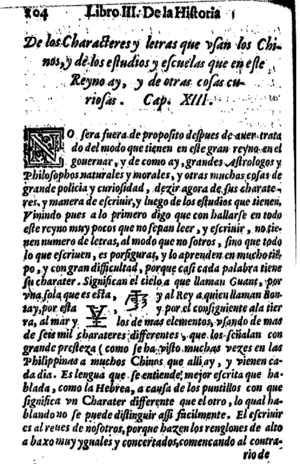 First page of the chapter on Chinese language in Mendoza's book, in its original 1585 Spanish edition. According to Staunton, of the two characters shown on this page, the first (said to mean "heaven") is hard to identify, although he guesses that it might be 𨺩 (a variant of 乾).[1] Modern Chinese translators of Mendoza's books suggest that 穹 may have been meant.[2] (May it though be a combination of two characters, with the one on top being a 天, perhaps in seal script?). The second (said to mean "king") is a poorly written 皇.[1]

Juan González de Mendoza (1545 - 14 February 1618) was the author of the first Western history of China to publish Chinese characters for Western delectation. Published by him in 1586, Historia de las cosas más notables, ritos y costumbres del gran reyno de la China (The History of the Great and Mighty Kingdom of China and the Situation Thereof) is an account of observations several Spanish travelers in China. An English translation by Robert Parke appeared in 1588 and was reprinted by the Hakluyt Society in two volumes, edited by Sir George T. Staunton, Bart. (London, 1853–54).

Mendoza's Historia may have been the first book-length work on China published in Europe since the days of Marco Polo. It was mostly superseded in 1615 by the work of much more informed Jesuit missionaries who actually lived in China, Matteo Ricci and Nicolas Trigault, De Christiana expeditione apud Sinas.

Mendoza was born at Torrecilla en Cameros (La Rioja (Spain)). He joined the army but after some years resigned to enter the Order of Saint Augustine. He based his most famous text on the journals of Miguel de Luarca, whose 1580 trip to Ming China provided a simple majority thereof. He never set foot in China, but spent two years in Mexico before returning to Spain. He was afterward Bishop of the Lipari Islands, of Chiapas, and of Popayán, where he died – honoured as a Spanish prelate.