Juan Manuel, Prince of Villena (5 May 1282 – 13 June 1348) was a Spanish medieval writer, nephew of Alfonso X of Castile, son of Manuel of Castile and Beatrice of Savoy. He inherited from his father the great Seigneury of Villena, receiving the titles of Lord, Duke and lastly Prince of Villena.[1] 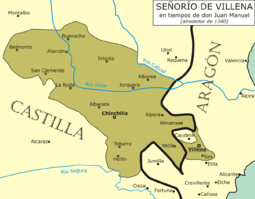 Extension of the Seigneury of Villena at the time of Juan Manuel, around the year 1340.

Juan Manuel was born in the Castle of Escalona, in what is now the province of Toledo, and was a politician and very active soldier. He was son of Manuel of Castile (son of Ferdinand III of Castile) and his second wife Beatrice of Savoy. With the death of his mother Beatrice in 1292, Juan Manuel became duke of Peñafiel. Juan Manuel was trained in arts such as equestrianism, hunting, and fencing, and in addition learned Latin, history, law, and theology. At the age of twelve, he fought to repel the attack of the Moors from Granada to Murcia. He married three times, choosing his wives for political and economic convenience, and worked to match his children with partners associated with royalty. Juan Manuel became one of the richest and most powerful men of his time, coining his own currency as the kings did. During his life, he was criticised for choosing literature as his vocation, an activity thought below a nobleman of such prestige.

Juan Manuel had constant confrontations with his king. At the time, the throne of Castile was occupied by two monarchs, Ferdinand IV and Alfonso XI. Juan Manuel's loyalty was with Alfonso, to whom Juan Manuel gave the hand of his daughter Constance. The wedding was postponed several times, until finally Alfonso XI jailed Constance in the Castle of Toro for unclear reasons. This incident angered Juan Manuel, who decided to turn against Alfonso. He declared war on Alfonso, beginning a confrontation that lasted five years.

Finally the Pope brought about reconciliation between Juan Manuel and Alfonso XI. This reconciliation was not complete until 1340, when Juan Manuel and Alfonso allied against the Muslims in the Battle of Río Salado, taking the city of Algeciras. After these events, Juan Manuel left political life and retired to Murcia, where he spent his last years focused on literature. Proud of his works, he decided to compile them all in a single volume. This compilation was destroyed in a fire, with no known copy preserved.

Juan Manuel died at Peñafiel in 1348, the age of sixty-six. Throughout his life, he wrote approximately thirteen books, of which only eight are preserved today. These works are predominantly didactic. 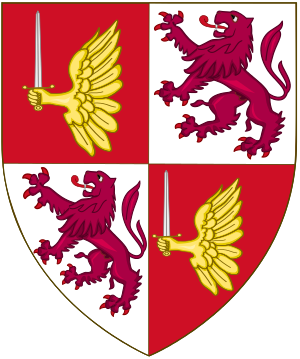 House of Manuel Coat of Arms.

Following the path of his uncle, Alfonso X of Castile, Juan Manuel wrote in Castilian, a peculiarity in times when Latin was the 'official' language for educated writing. He wrote in the vernacular to facilitate access to literature for a greater number of Castillian readers.

While his writings were directed largely to a literate class, it was nonetheless his assumption that they would be read aloud, as was common during the Middle Ages. He is ever conscious of propriety, and speaks carefully, both because of his elevated rank, and in case women or children should hear what he has written. His works reflect his character, ambitions, and beliefs, so that in many ways they are a mirror of his time and circumstances.

Juan Manuel's work is marked by a great preoccupation both with the practical and the spiritual life, and is directed not only to the nobility, but also to lower estates, since much of his work speaks not only of the duties of lords, but of their vassals as well. While his work is often classified under the general Medieval rubric of "the education of princes" it also begins to approach the Machiavellianism which is more characteristic of the Renaissance, by virtue of its dedication to the astute art of governing.

The structure of stories in El Conde Lucanor reflects the ordinances and hierarchical structuring of the medieval world. In the first parts a young nobleman, Lucanor, proposes an abstract problem to Patronio; later, he gives an apologue which extracts the solution from Patronio's tale, applying it to himself. Juan Manuel concludes the story with a short verse, condensing the moral of the story into short, concrete statements. 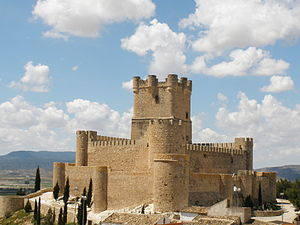 Castle of Villena, capital of Seigneury of Villena.

His first wife was Elizabeth, daughter of James II of Majorca and his wife Esclarmonde of Foix. She died approximately in 1301 and they didn't have any children.

By Constance of Aragon, daughter of James II of Aragon: