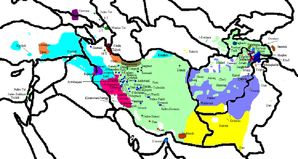 The Judeo-Iranian languages (or dialects) are a number of related Jewish variants of Iranian languages spoken throughout the formerly extensive realm of the Persian Empire. Judeo-Iranian dialects are generally conservative in comparison with those of their Muslim neighbours. Judeo-Shirazi, for example, remains close to the language of Hafiz.

Like most Jewish languages, all the Judeo-Iranian languages contain great numbers of Hebrew loanwords, and are written using variations of the Hebrew alphabet. Another name used for some Judeo-Iranian dialects is Latorayi, sometimes interpreted by folk etymology as "not [the language] of the Torah". This refers to a form of the language in which the number of Hebrew and Aramaic loanwords is deliberately maximised to allow it to function as a secret code. In general, however, the number of such loanwords is small compared with that in other Jewish languages such as Yiddish or Judaeo-Spanish.