Judicial Committee of the Privy Council 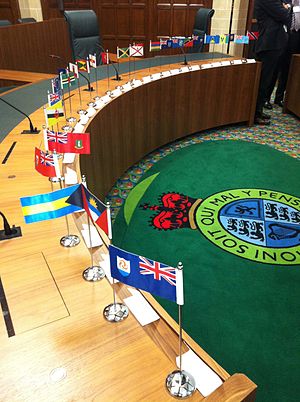 The Judicial Committee's permanent home is in London, in the United Kingdom. On 1 October 2009, it moved from the Privy Council Chamber, in Downing Street, to the former Middlesex Guildhall building, which had been refurbished in 2007 to provide a home for both the JCPC and the newly created Supreme Court of the United Kingdom. In this renovated building, Court 3 is used for Privy Council sittings.

The Judicial Committee of the Privy Council has jurisdiction in the following domestic matters:

Additionally, the government may (through the Queen) refer any issue to the committee for "consideration and report".

In other courts in the United Kingdom, judgments of the Judicial Committee are only of "persuasive authority" and are not binding as a matter of law. However, since the judges of the committee were usually judges of the House of Lords Judicial Committee (essentially the highest court in the United Kingdom) and now usually justices of the UK Supreme court, its decisions are extremely persuasive and usually followed.

The Judicial Committee of the Privy Council is the Court of Final Appeal for the Church of England. It hears appeals from the Arches Court of Canterbury and the Chancery Court of York, except on matters of doctrine, ritual or ceremony, which go to the Court for Ecclesiastical Causes Reserved. By the Church Discipline Act 1840 and the Appellate Jurisdiction Act 1876 all archbishops and bishops of the Church of England became eligible to be members of the Judicial Committee.

Prior to the coming into force of the Constitutional Reform Act 2005, the Privy Council was the court of last resort for devolution issues. On 1 October 2009 this jurisdiction was transferred to the new Supreme Court of the United Kingdom.

The Judicial Committee holds jurisdiction in appeals from the following 31 jurisdictions (including twelve independent nations):

Appeal is to ‘Her Majesty in Council’ from eight independent nations, and nineteen other jurisdictions:

Appeal is directly to the Judicial Committee from three independent Commonwealth republics:

Appeal to the head of state:

The following are members of the Judicial Committee:

Initially, all Commonwealth realms and their territories maintained a right of appeal to the Privy Council. Many of those Commonwealth countries that became republics, or which had indigenous monarchies, preserved the Judicial Committee’s jurisdiction by agreement with the United Kingdom. However, retention of a right of appeal to a court located overseas, made up mostly of British judges who may be out of tune with local values, has often come to be seen as incompatible with notions of an independent nation’s sovereign status, and so a number of Commonwealth members have ended the right of appeal from their jurisdiction. The Balfour Declaration of 1926, while not considered to be lex scripta, severely limited the conditions under which the Judicial Committee might hear cases:[9]

In 1901, the Constitution of Australia limited appeals from the new federal High Court of Australia to the Privy Council, by prohibiting appeals on constitutional matters unless leave is granted by the Australian High Court on inter se questions. Appeals on non-constitutional matters were not prohibited, but the federal Parliament of Australia had the power to legislate to limit them. Subsequently, Australia effectively abolished the right of appeal from the Commonwealth courts by statute.[10][11] Appeals from state courts, a continuation of the right to appeal decisions of colonial courts before 1901, continued, until they were also abolished by the Australia Act 1986, which was enacted by both the UK and Australian parliaments, on the request of all the state governments. The Australian Constitution retains the provision allowing the High Court of Australia to permit appeals to the Privy Council on inter se questions; however, the High Court has stated that it will not give such permission and that the jurisdiction to do so "has long since been spent" and is obsolete.[12]

Canada created its own Supreme Court in 1875 and abolished appeals to the Privy Council in criminal cases in 1888.[13] However, there were several factors that served to limit the effectiveness of such measures:

Nadan, together with the King–Byng Affair, was a major irritant for Canada and provoked the discussion at the 1926 Imperial Conference which led to the Balfour Declaration. With that Declaration and its statutory confirmation in the Statute of Westminster 1931 (Imp, 22-23 Geo 5, c.4)[16] the impediment to abolishing appeals to the Privy Council, whether or not it had been legitimate, was comprehensively removed. Criminal appeals to the Privy Council were ended in 1933. Moves to extend the abolition to civil matters were shelved during the growing international crisis of the 1930s but re-tabled after World War II, and civil appeals ended in 1949, with an amendment of the Supreme Court Act.[17] Cases begun before 1949 were still allowed to appeal after 1949, and the final case to make it to the Council was not until 1959 with the case of Ponoka-Calmar Oils v Wakefield.[18]

The JCPC played a controversial role in the evolution of Canadian federalism in that, whereas most Fathers of Confederation in negotiating the union of the British North American colonies against the backdrop of the American Civil War wished to ensure a strong central government vis-à-vis relatively weak provinces, appeals to the JCPC in constitutional matters progressively shifted the balance in favour of the provinces.[19] While a few commentators have suggested that Canadian First Nations retain the right to appeal to the Privy Council because their treaties predate their relationship to Canada, the JCPC has not entertained any such appeal since 1867 and the dominant view is that no such appeal right exists.[citation needed]

The then President of the Supreme Court of the United Kingdom, Lord Phillips of Worth Matravers, has voiced displeasure of Caribbean and other Commonwealth countries continuing to rely on the British JCPC. During an interview Lord Phillips was quoted by the Financial Times as saying: "'in an ideal world' Commonwealth countries—including those in the Caribbean—would stop using the Privy Council and set up their own final courts of appeal instead."[29]

On 18 December 2006, the Judicial Committee made history when for the first time in more than 170 years it ventured outside London, holding a five-day sitting in The Bahamas. Lords Bingham, Brown, Carswell, and Scott, and Baroness Hale travelled to The Bahamas for the special sitting at the invitation of Dame Joan Sawyer, then the President of the Court of Appeal of the Bahamas;[30] the Committee returned to The Bahamas in December 2007 for a second sitting. On the latter occasion, Lords Hope, Rodger, Walker, and Mance, and Sir Christopher Rose, heard several cases. At the end of the sitting, Lord Hope indicated that there may be future sittings of the Committee in The Bahamas,[31] and the Committee has indeed sat in The Bahamas again, in 2009.

Sri Lanka, formerly Ceylon, abolished appeals to the Privy Council in 1972, on becoming a republic. Previously, the Privy Council had ruled in Ibralebbe v The Queen[32] that it remained the highest court of appeal in Ceylon notwithstanding the country's independence as a Dominion in 1948.[citation needed]

It should be noted, however, that decisions of the Privy Council before 1 July 1997 on non-Hong Kong appeals, just as decisions of British courts in general, are not strictly binding on Hong Kong courts, for all that such decisions are persuasive and will be treated with great respect by courts of Hong Kong. As Lord Millet, a retired Law Lord sitting as a Non-permanent Judge of the Court of Final Appeal, aptly summarised the position in China Field Limited v Appeal Tribunal (Buildings),[34]

Decisions of the Privy Council on Hong Kong appeals before the 1 July 1997 remain binding on the courts of Hong Kong. This accords with the principle of continuity of the legal system enshrined in Article 8 of the Basic Law. Decisions of the Privy Council on non-Hong Kong appeals are of persuasive authority only. Such decisions were not binding on the courts in Hong Kong under the doctrine of precedent before 1 July 1997 and are not binding today. Decisions of the House of Lords before 1 July 1997 stand in a similar position. It is of the greatest importance that the courts of Hong Kong should derive assistance from overseas jurisprudence, particularly from the final appellate courts of other common law jurisdictions. This is recognised by Article 84 of the Basic Law.

Pursuant to Article 158 of the Basic Law (the constitutional instrument of the SAR), the power of final interpretation of the Basic Law is vested not in the Court of Final Appeal of Hong Kong but in the Standing Committee of the National People's Congress of China, which, unlike the Judicial Committee of the Privy Council, is a political body rather than an independent and impartial tribunal of last resort.

The right of appeal to the Privy Council was provided for in the Constitution of the Irish Free State until its abolition in 1933 by an Act of the Oireachtas.[35]

In May 2015, the Jamaican House of Representatives approved with the necessary two-thirds majority bills to end legal appeals to the Judicial Committee of the Privy Council and make the Caribbean Court of Justice Jamaica's final Court of Appeal. The reform will be debated by the Jamaican Senate, however, the government will need the support of at least one opposition Senator for the measures to be approved by the required two-thirds majority.[38][39]

Judgment was delivered on 3 March 2015 in the last appeal from New Zealand to be heard by the Judicial Committee of the Privy Council.[42][43][44]

Despite the Rhodesian Constitution of 1965 coming into effect as a result of the Unilateral Declaration of Independence, appeals continued to be accepted by the Privy Council as late as 1969 due to the fact that under international law, Rhodesia remained a UK colony until gaining its independence as Zimbabwe in 1980.

Singapore abolished Privy Council appeals in all cases save those involving the death penalty, or in civil cases where the parties had agreed to such a right of appeal, in 1989. The abolition followed a decision of the Privy Council the previous year that criticised the "grievous injustice" suffered by the opposition politician J. B. Jeyaretnam at the hands of the Government of Singapore. The remaining rights of appeal were abolished in 1994.

South Africa abolished the right of appeal to the Privy Council from the Appellate Division of the then Supreme Court of South Africa in 1950.