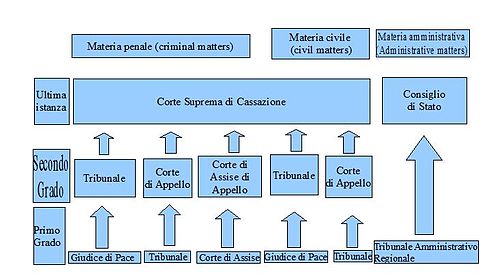 In Italy, judges are public officials and, since they exercise one of the sovereign powers of the State, only Italian citizens are eligible for judgeship. Italy's independent judiciary enjoys special constitutional protection from the executive branch. Once appointed, judges serve for life and cannot be removed without specific disciplinary proceedings conducted in due process before the Consiglio Superiore della Magistratura. The Ministry of Justice handles the administration of courts and judiciary, including paying salaries or constructing new courthouses. The Ministry of Justice and that of the Infrastructures fund and the Ministry of Justice and that of the Interiors administer the prison system. Lastly, the Ministry of Justice receives and processes applications for presidential pardons and proposes legislation dealing with matters of civil or criminal justice.

The structure of the Italian judiciary is divided into three tiers:

Note: There exist significant problems with applying non-Italian terminology and concepts related to law and justice to the Italian justice system. For that reason, some of the words used in the rest of the article shall be defined.

Justice of the Peace

The Justice of the Peace is the court of original jurisdiction for less significant civil matters. The court replaced the old Preture (Praetor Courts) and the Giudice Conciliatore (Judge of conciliation) in 1999. This court presides over lawsuits in which claims do not exceed €5,000 in value or €15,000 in certain circumstances.

The Tribunale is the court of general jurisdiction for civil matters. Here, litigants are statutorily required to be represented by an Italian barrister, or avvocato. It can be composed of one Judge or of three Judges, according to the importance of the case.
When acting as Appellate Court for the Justice of the Peace, it is always monocratico (composed of only one Judge).

The Court has jurisdiction to retry the cases heard by the Tribunale as a Court of first instance and is divided into three or more divisions: labor, civil, and criminal.