Judith of Flanders, Countess of Northumbria

From Infogalactic: the planetary knowledge core
Jump to: navigation, search
This article is about the wife of Tostig Godwinson. For the wife of King Æthelwulf, see Judith of Flanders.

She was the owner of many books and illuminated manuscripts, which she bequeathed to Weingarten Abbey.

Judith was born c.1033 in Bruges, the only child of Baldwin IV, Count of Flanders by his second wife, Eleanor of Normandy, who was herself, the daughter of Richard II of Normandy and Judith of Brittany.[2] Judith had an older half-brother, Baldwin V, Count of Flanders, who succeeded their father upon his death which had occurred when Judith was about two years old. (Some scholars argue that Judith's father was Baldwin V, not Baldwin IV.[3]) Judith's niece was Matilda of Flanders who married William, the first Norman king of England, known to history as "William the Conqueror". King William was Judith's first cousin, being the son of her maternal uncle, Robert of Normandy.

On an unknown date before September 1051, she married her first husband, Tostig Godwinson, brother of King Harold II of England. In September 1051, Judith was forced to flee England for Bruges, along with her husband and in-laws after Tostig joined his father's armed rebellion against King Edward the Confessor; however, they returned home the following year.

He was created Earl of Northumbria in 1055, making Judith the Countess of Northumbria, from that date onwards. His distinguished marriage to Judith had helped Tostig secure the earldom.[4]

Together they had children whose names and numbers are not recorded. They were described in the Vita Edwardi Regis as "unweaned" at the time of their father's death.[5] Tostig had at least three illegitimate sons by unknown mistresses.

Judith was described as having been a "pious and inquisitive woman"; her piety was expressed in the many gifts and donations she made to the Church of St. Cuthbert in Durham, which included landed estates and an ornate crucifix. The latter allegedly was a present to appease the saint after she challenged St. Cuthbert's ruling that forbade women to enter the cathedral which housed his relics. Judith, angered that women were not permitted to set foot inside the church and wishing to worship at his tomb, had decided to put Cuthbert's prohibition to the test by ordering her serving woman to go inside to see what repercussions would follow for breaking the holy decree (Judith had planned to go herself upon the latter's safe return); when the woman was about to enter the churchyard, she was stricken by a sudden, violent force of wind that left her infirm and eventually killed her. Judith, as a result of superstitious fear, had the crucifix especially made for St. Cuthbert's shrine.[6] Throughout her life, she collected and commissioned many books and illuminated manuscripts, some of which are extant,[7] including the Gospels of Countess Judith, which are currently housed in Pierpont Morgan Library in New York City. These were written and illuminated by English scribes and artists to record for posterity, Judith's generosity to the Church.

In October 1065, Northumbria rose in rebellion against the rule of Tostig. After his brother Harold persuaded King Edward to accept the demands made by the rebels, there was an acrimonious confrontation between the two brothers, with Tostig accusing Harold of fomenting the rebellion. In November, Tostig was outlawed by King Edward, and Judith, along with Tostig and her children, was compelled to seek refuge with her half-brother in Flanders the following month. Count Baldwin appointed Tostig as castellan of Saint-Omer.[8] In May 1066 following the succession of Harold to the English throne in January, he returned to England with a fleet provided by Baldwin to seek revenge on his brother. He formed an alliance with King Harold III of Norway, but they were both killed on 25 September 1066 at the Battle of Stamford Bridge by the forces of King Harold.

After her husband's death at Stamford Bridge, Judith moved to Denmark.[9] It is presumed that she brought her "unweaned" children with her to Denmark; however, nothing certain is known of their subsequent fates. A pair of Norwegian king-sagas, Fagrskinna and Morkinskinna, identify Skuli Konungsfóstri, male-line ancestor of king Inge II of Norway, as son of Tostig, but Heimskringla gives him different parentage. Neither names Judith as his mother. Less than a month after Tostig's death, Judith's brother-in-law was killed at the Battle of Hastings by the Norman army led by her cousin, William the Conqueror, who would thereafter reign as William I of England. 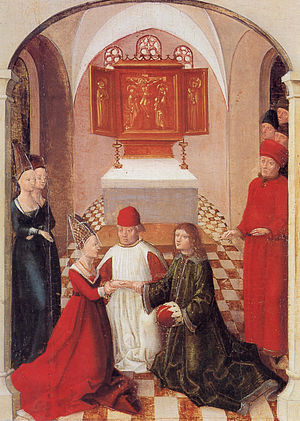 In 1071, when she was 38 years of age, she married her second husband, Welf I, Duke of Bavaria, who had divorced his childless wife, Etherinde von Northeim in 1070.[10] Upon her marriage, she became Duchess of Bavaria; however in 1077, her husband was deprived of his title, and did not regain it until 1096, two years after her death.

They made their principal home at the castle of Ravensburg and together had two sons,[11] and one daughter:

Judith died on 5 March 1094 and was buried at St. Martin Monastery, the Benedictine abbey which had been built by Duke Welf on the Martinsberg in Weingarten, and had received Judith's patronage. She also had bequeathed her magnificent library and a relic of Christ's Blood to the abbey.[12] The Chronicon of Bernold recorded the death "1094 1V Non Mar of Iuditha uxor ducis Welfonis Baioariae" and her subsequent burial.[13] Her husband Duke Welf died in 1101 in Cyprus while returning home from the First Crusade.

Judith appears as a character in Georgette Heyer's novel "The Conqueror" and in Jean Plaidy's historical romance The Bastard King; however, in both, she is incorrectly portrayed as Matilda of Flanders' sister.