From Infogalactic: the planetary knowledge core
Jump to: navigation, search
For the commune in France, see Josse, Landes.

Saint Judoc, Saint Josse, Saint Jost or Saint Joyce (traditionally 600–668)[1] was a seventh-century Breton noble and Catholic saint,[2] who sought the protection of Aymon, a predecessor of the counts of Ponthieu, to live as a hermit and renounce the crown of Brittany, in a place then called either Sidraga or Schaderias or Runiacum,[3] located in the coastal forest near the mouth of the River Canche. He travelled to Rome along the via Francigena, returning safely shortly before his death.

The name Judoc is the 14th century Breton version of Iudocus in Latin, Josse in French, Jost, Joost or Joos in Dutch and Joyce in English. Meaning "lord", the name became rare after the 14th century.

According to tradition, Judoc was the son of Saint Judicael, King of Brittany. His brothers were Alain II Hir and Saint Winnoc. In about 636, Judoc renounced his inheritance and wealth, and went on a pilgrimage to Rome. Whilst there, he was ordained a priest, and became hermit in Ponthieu, in a place called Saint-Josse-sur-Mer. Judoc died here, and it was maintained that his body was incorruptible.[4] Apparently his followers would cut his beard and hair as it continued to grow.[5] 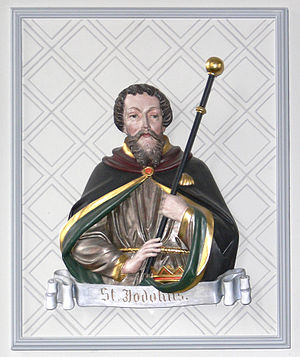 St. Jodoc as depicted in the Church of St. Christina in Ravensburg.

Saint Judoc, never formally canonised, developed a local cultus. The Abbey of Saint-Josse, beginning as a small monastery on the site of his retreat, was built in the eighth century at the place where Judoc's shrine was kept. In 903, some monks of the abbey, fleeing the Norman raiders, took refuge in England, bearing his relics. The tradition of the New Minster of Hyde at Winchester (founded 901), was that the relics were translated there by St Grimbald, and the date was commemorated annually, on 9 January.[6] These feasts were accorded high rank at the cathedral.[5]

From France , the veneration of Saint Josse spread through the Low Countries, England Germany and Scandinavia, regions where variations of Josse, Joyce, Joos, Joost, and the diminutive Jocelyn,[7] etc. became popular names for both men and women, and chapels and churches were dedicated to him.

The mal Saint Josse was the term for the ills resulting from snakebite, against which the saint's name was invoked by the fifteenth-century French poet Eustache Deschamps in an imprecatory ballade:[8] "...Du mau saint Leu, de l'esvertin, Du saint Josse et saint Matelin... soit maistre Mahieu confondus!".[9] According to Alban Butler, the abbey was given by Charlemagne to Alcuin and functioned as a hostel for those crossing the English Channel; it became a centre of pilgrimage, especially popular with Flemish and Germans in the fourteenth and fifteenth centuries.

La vie de Saint Josse was written in Old French verses by the learned and competent poet and translator Pierre de Beauvais in the thirteenth century.[10]

The Suaire de St-Josse, the "Shroud of Saint Judoc " that is now conserved in the Musée du Louvre is a rich silk samite saddle cloth that was woven in northeastern Iran, some time before 961, which was used to wrap the bones of Saint Judoc when he was reinterred in 1134.[11]

The abbey was closed in 1772, sold and then dismantled in 1789, leaving no traces of the monumental buildings; the abbey church became the parish church of the French commune of Saint-Josse.

Saint Judoc or Josse has his feast-day on 13 December.

Cultural depictions usually portray him holding the pilgrim's staff. He is also shown with a crown at his feet, referring to the renunciation of his lands and his fortune. In Austria, there is a fine representation of St. Judoc on the mausoleum of Maximilian at Innsbruck. St. Judoc was most famously mentioned by Chaucer's Wife of Bath, who swears "by God and by Seint Joce". This suggests that his name was often invoked in oaths.[5]