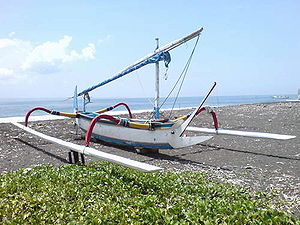 A Balinese jukung at rest

A jukung or canoe is a small wooden Indonesian outrigger canoe. It is a traditional fishing boat, but newer uses include "Jukung Dives", using the boat as a vehicle for small groups of SCUBA divers.

Essentially of Balinese origin, the double outrigger jukung is but one of many types of Pacific/Asian outrigger canoes that use the crab claw sail traditional throughout Polynesia. Whilst this sail presents some difficulties in tacking into the wind, actually requiring to jibe around, a jukung is superb in its reaching ability and jibe-safe running. They are usually highly decorated and bear a marlin-like prow.

People in kalimantan also named their boat Jukung. It is used for transport in daily activities such as going to the office, to school, or shopping in pasar terapung (The Floating Market, a very famous tourist attraction.)

In the late 1980s there was a race of over 1000 miles in open outrigger canoes by nine crews, who travelled from Bali to Darwin across the Timor Sea. Crews were from New Zealand, Australia, USA, England, Japan, France, Germany, The Netherlands and Indonesia. This was a three-month expedition masterminded by Bob Hobmann, filmed and made into a documentary called "Passage out of Paradise"; it was featured by the National Geographic Society as "The Great Jukung Race".

The expedition started in Bali, where once crews were familiar with sailing their Jukungs they embarked on a two-month adventure following ancient sailing routes along the eastern Islands via Komodo Island. They completed the journey with a five-day sail across the Arafura Sea to Darwin, via the Tiwi Islands.

Challenges experienced were storms requiring numerous boat repairs, waterspouts, adverse currents and whirlpools. Hazards included drifting onto war-torn Timor, minor wound infections, night-time freighters, sightings of sperm whales and giant white sharks. Some were viciously attacked by hornets while preparing to leave a remote beach camp. The crews unanimously decided to sail as a group, as opposed to racing the final leg of the journey, for safety.