Julia Avita Mamaea (14 or 29 August after 180–235) was the second daughter of Julia Maesa, a powerful Roman woman of Syrian origin, and Syrian noble Gaius Julius Avitus Alexianus. She was a niece of empress Julia Domna; emperor Lucius Septimius Severus and sister of Julia Soaemias Bassiana. She was born and raised in Emesa (modern Homs, Syria).

Julia's first husband was a former consul (whose name is unknown) who died. Julia married as her second husband Syrian Promagistrate Marcus Julius Gessius Marcianus.[1] Julia bore two children during her marriage to Marcianus, a daughter Theoclia and a son, Marcus Julius Gessius Bassianus Alexianus, later emperor Alexander Severus. Perhaps she may have had an elder son called Marcus Julius Gessius Bassianus.[2] Unlike her sister, Julia was reported to be a virtuous woman, never involved in scandals. Julia was attentive to the education of her son, Alexander, whom she prepared adequately for becoming emperor of Rome. Alexander thought much of his mother's advice and followed what she told him to do.[3]

As a member of the Imperial Roman family, she watched closely the death of her cousin Caracalla and the ascent to power of her nephew Elagabalus, the oldest grandson of Julia Maesa and her choice to the throne. Eventually Elagabalus and his mother Julia Soaemias proved incompetent rulers and favour fell on Alexander, Julia's son. He became emperor in 222, following Elagabalus' murder by the Praetorian Guard. Julia and her mother became regents in the name of Alexander, then 14 years old. He never managed to escape her maternal domination, but at first Julia ruled very effectively. She reversed all Elagabalus' scandalous policies, chose 16 distinguished senators as advisers and relied heavily on the famous Lawyer Ulpian, who was also from Syria. Ulpian was made head of the Praetorian Guard. However, he was unable to control the Praetorians and was murdered by them in 228. Upon adulthood, Alexander confirmed his esteem for his mother and named her consors imperii (imperial consort). It was in this condition that she accompanied her son in his campaigns: a custom started with Julia Domna. 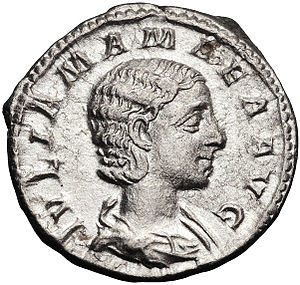 Meanwhile, Julia had become madly jealous of her son's wife, Barbia Orbiana, whom Alexander married in 225, and whose father had been made Caesar or co-ruler. Julia had Barbia thrown out of the palace and had her father executed. Julia called on Origen, the Alexandrian Christian leader, to provide her with instruction in Christian doctrine.[4]

After an inconclusive expedition to repel a Persian invasion in 232, mother and son were sent north to deal with a German attack. Alexander so alienated the Rhine legions by his lack of military prowess and his inflexibility towards pay that the troops proclaimed Maximinus Thrax as emperor in 235.[5] Troops sent to kill Alexander found him clinging to his mother in a tent. Mother and son were butchered together, ending the Severan dynasty.[6]