Julian of Norwich (c. 8 November 1342 – c. 1416) was an English anchoress and an important Christian mystic. Her Revelations of Divine Love, written around 1395, is the first book in the English language known to have been written by a woman. Julian was also known as a spiritual authority within her community where she also served as a counsellor and advisor.[1] She is venerated in the Roman Catholic, Anglican and Lutheran churches.

Very little is known about Julian's life. Even her name is unknown; the name "Julian" commonly given to her derives from the fact that her anchoress's cell was built onto the wall of the Church of St Julian in Norwich. Her writings indicate that she was probably born around 1342 and died around 1416.[2][3] She may have been from a privileged family that lived in or near Norwich, at the time the second largest city in England. Watson considers it likely that she received her early education with the Benedictine nuns at nearby Carrow.[4]

Plague epidemics were rampant during the 14th century and, according to some scholars, Julian may have become an anchoress unmarried or, having lost her family in the Plague, as a widow.[5] Becoming an anchoress may have served as a way to quarantine her from the rest of the population. There is scholarly debate as to whether Julian was a nun in a nearby convent or a laywoman.[5] 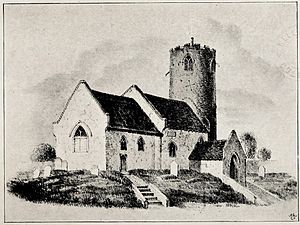 Image of the original Church of St Julian, Norwich

When she was 30 and living at home, Julian suffered from a serious illness. Since she was presumed to be near death, her curate came to administer the last rites of the Catholic Church on 8 May 1373. As part of the ritual, he held a crucifix in the air above the foot of her bed. Julian reported that she was losing her sight and felt physically numb, but as she gazed on the crucifix she saw the figure of Jesus begin to bleed. Over the next several hours, she had a series of 16 visions of Jesus Christ, which ended by the time she recovered from her illness on 13 May 1373.[6][7] Julian wrote about her visions immediately after they had happened (although the text may not have been finished for some years), in a version of the Revelations of Divine Love now known as the Short Text; this narrative of 25 chapters is about 11,000 words long.[8] It is believed to be the earliest surviving book written in the English language by a woman.[9]

Twenty to thirty years later, perhaps in the early 1390s, Julian began to write a theological exploration of the meaning of the visions, known as The Long Text, which consists of 86 chapters and about 63,500 words.[10] This work seems to have gone through many revisions before it was finished, perhaps in the first or even second decade of the 15th century.[8]

The English mystic Margery Kempe, who was the author of the first known autobiography written in England, mentioned going to Norwich to speak with her in around 1414.[11]

Adam Easton's Defense of St Birgitta, Alfonso of Jaen's Epistola Solitarii, and William Flete's Remedies against Temptations, are all referred to in Julian's text.[12]

The Short Text survives in only one manuscript, the mid-15th century Amherst Manuscript, which was copied from an original written in 1413 in Julian’s lifetime.[13] The Short Text does not appear to have been widely read and was not edited until 1911.[14]

The Long Text appears to have been slightly better known, but still does not seem to have been widely circulated in late medieval England. The one surviving manuscript from this period is the mid- to late-15th century Westminster Manuscript, which contains a portion of the Long Text (not naming Julian as its author), refashioned as a didactic treatise on contemplation.[15] The surviving manuscripts of the whole Long Text fall into two groups, with slightly different readings. On the one hand, there exists the late 16th century Brigittine Long Text manuscript, produced in exile in the Antwerp region and now known as the Paris Manuscript. The other set of readings may be found in two manuscripts, now in the British Library's Sloane Collection.[16] It is believed these nuns had an original, perhaps a holograph, manuscript of the Long Text written in Julian's Norwich dialect.[16] which were written out and preserved in the Cambrai and Paris houses of the English Benedictine nuns in exile in the mid-17th century.[17]

The first printed version of the Revelations was edited by a Benedictine, Serenus Cressy, in 1670. It was reprinted in 1843, 1864 and again in 1902. Modern interest in the text increased with the 1877 publication of a new edition of the Long Text by Henry Collins. An important moment was the publication of Grace Warrack's 1901 version of the book, with its "sympathetic informed introduction" and modernised language, which introduced most early 20th century readers to Julian's writings.[18] Following the publication of the Warrack edition, Julian's name spread rapidly and she became a topic in many lectures and writings. Many editions of the works have been published in the last forty years (see below for further details), with translations into French (five times), German (four times), Italian, Finnish, Norwegian, Swedish, Danish, Dutch, Catalan, Greek and Russian.[15]

Revelations is a celebrated work in Catholicism and Anglicanism because of the clarity and depth of Julian's visions of God.[19] Julian of Norwich is now recognised as one of England's most important mystics.[20] 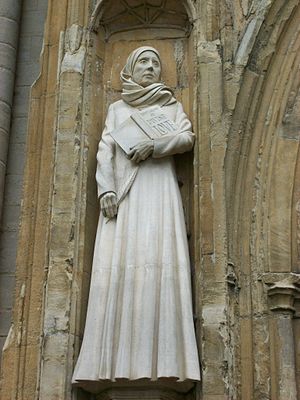 Statue of Julian on the front of Norwich Cathedral, holding the book Revelations of Divine Love

For Denys Turner the core issue Julian addresses in Revelations of Divine Love is "the problem of sin". Julian says that sin is "behovely", which is often translated as "necessary", "expedient", or "appropriate". A more nuanced reading relates it to the scholastics "conveniens" or "fitting".[21][4]

Julian came to such a sense of the awfulness of sin that she reckoned the pains of hell are to be chosen in preference to it. “And to me was shown no harder hell than sin. For a kind soul has no hell but sin.”[22] Julian believed that sin was necessary because it brings someone to self-knowledge, which leads to acceptance of the role of God in their life.[23] Julian describes how God suffers with his creation as it experiences great and multifaceted evil.[24]

Julian lived in a time of turmoil, but her theology was optimistic and spoke of God's love in terms of joy and compassion. Revelations of Divine Love "contains a message of optimism based on the certainty of being loved by God and of being protected by his Providence."[25]

The most characteristic element of her mystical theology was a daring likening of divine love to motherly love, a theme found in the Biblical prophets, as in Isaiah 49:15.[26][25] According to Julian, God is both our mother and our father. As Caroline Walker Bynum showed, this idea was also developed by Bernard of Clairvaux and others from the 12th century onward.[27] Some scholars think this is a metaphor rather than a literal belief. In her fourteenth revelation, Julian writes of the Trinity in domestic terms, comparing Jesus to a mother who is wise, loving and merciful. F. Beer asserted that Julian believed that the maternal aspect of Christ was literal and not metaphoric: Christ is not like a mother, he is literally the mother.[28] Julian emphasised this by explaining how the bond between mother and child is the only earthly relationship that comes close to the relationship a person can have with Jesus.[29] She also wrote metaphorically of Jesus in connection with conception, nursing, labour and upbringing, but saw him as our brother as well. 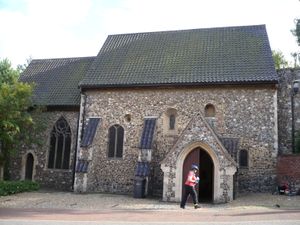 Church of St Julian in Norwich

She wrote, "For I saw no wrath except on man's side, and He forgives that in us, for wrath is nothing else but a perversity and an opposition to peace and to love."[30] She wrote that God sees us as perfect and waits for the day when human souls mature so that evil and sin will no longer hinder us.[31]

Although Julian's views were not typical, the authorities might not have challenged her theology because of her status as an anchoress. A lack of references to her work during her own time may indicate that the religious authorities did not count her worthy of refuting, since she was a woman.

Julian's feast day in the Roman Catholic tradition is on 13 May.[5] In the Anglican and Lutheran traditions, her feast day is on 8 May.

The Catechism of the Catholic Church quotes Julian of Norwich when it explains the Catholic viewpoint that in the mysterious designs of Providence, God can draw a greater good even from evil:[25] "Here I was taught by the grace of God that I should steadfastly keep me in the faith... and that at the same time I should take my stand on and earnestly believe in what our Lord shewed in this time—that 'all manner [of] thing shall be well.'"[32]

In 1981 Sydney Carter wrote the song "Julian of Norwich" (sometimes called "The Bells of Norwich"), based on words of Julian.

Each year, beginning in 2013, there has been a week-long celebration of Julian of Norwich in her home city of Norwich, England. With concerts, lectures, workshops, and tours, the week aims to educate all interested people about Julian of Norwich, presenting her as a cultural, historical, literary, spiritual, and religious figure of international significance.