Juliana Maria of Brunswick-Wolfenbüttel-Bevern (Danish: Juliane Marie; 4 September 1729 – 10 October 1796) was queen of Denmark between 1752 and 1766, second consort of king Frederick V of Denmark and Norway, mother of the prince-regent Hereditary Prince Frederick of Denmark and Norway and herself de facto regent 1772–1784. King Christian VIII of Denmark descends from her. 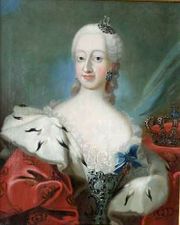 Juliana Maria was given the simple but very strict upbringing usual at many of the smaller princely German courts. As a child, she appears to have stuttered.

She married King Frederick V of Denmark at Frederiksborg Palace on 8 July 1752, just over six months after the death of his first wife Louise of Great Britain, and was crowned the same day. The marriage was arranged by Count Moltke, who thought it best that the king remarried as soon as possible, in an attempt of stabilizing his behavior. The king was initially unwilling to remarry, unless it was with an English princess, which was not available at the time. However, he was convinced after seeing her portrait and having made some investigation about her.

Juliana Maria was personally described as good-looking and sensible, but the marriage was not popular in Denmark, where it was considered to have taken place too soon after the death of her predecessor, the popular former queen Louise, and it was a difficult task for her to replace her popular predecessor. She had several stepchildren by marriage, but she was given no influence over their upbringing.

She did her best to accustom herself to Denmark and make herself popular as queen, and although she never fully mastered the Danish language, she frequently used it both by speaking and writing it. She also had two Danes in succession, J. Schielderup Sneedorff and Guldberg, appointed governors responsible for the tutelage of her son, Hereditary Prince Frederick, who was thereby given the Danish language as his mother tongue. Despite these efforts, she never managed to make herself a popular queen.

Despite the constant infidelity of King Frederick V, she was regarded to have illustrated an ideal of a spousal duty, accepting his infidelity without complaint and nursing him during his illness.

As a queen, Juliana Maria lived a quiet and subdued life and had nothing to do with the affairs of state whatsoever. Her brother-in-law, Frederick the Great, had encouraged her marriage and expected her to act as his agent in Denmark and help him to remove Count Von Bernstorff from his position, but she never participated in any such thing.

In 1766, she was widowed, and her stepson Christian VII became king. 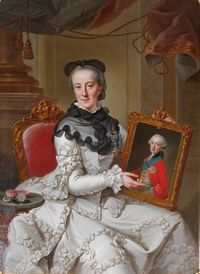 The Queen-Dowager showing the portrait of her only son hereditary prince Frederick by Johann Georg Ziesenis.

Her stepson, Christian VII, treated her attempts to connect with him with coldness, and his consort Caroline Mathilde did not like her. Consequently, she was hardly ever invited to the royal table, nor was she visited very often by the king and queen. In 1768, she participated in the banishment of Christian's mistress Støvlet-Cathrine, who was believed to have influence over the king.

In 1770, the new king, her stepson King Christian VII of Denmark, had become insane and the power had fallen in the hands of his consort Caroline Matilda of Great Britain and her lover Johann Friedrich Struensee. They had liberal political views and issued a series of democratic laws that raised the opposition to the nobility. Juliane Marie became the centre of the opposition, and she belonged to the group participating in the coup d'état that brought down the government of Struensee by exposing his affair with the queen. She arranged for the king to sign the arrest of Struensee after she had already made the arrest, issued in the name of the king. In 1772, Struensee was executed and Queen Caroline Mathilda was exiled.

The son of Juliane Marie, Hereditary Prince Frederick, was now made regent. In reality, he was the puppet of his mother, who was the real and undisputed ruler during his regency, aided by Ove Høegh-Guldberg. At the coup, she was praisingly compared to Esther, Deborah, and Judith. The king was made to sign a letter thanking her for having "saved" him.[1] Her government was one of extreme conservatism. She restored the privileges of the nobility and was regarded as the hero of the aristocracy and the savior of their privileges. The opposition, on the other hand, called her a devil and the cause of all misfortune of Denmark. She is remembered for having founded a porcelain factory, which was created royal factory of the state in 1779, today known simply as Royal Copenhagen. The crown of her regency is regarded the Law of Indigenous Rights of 1776, which prohibited foreigners from holding public office.[1] 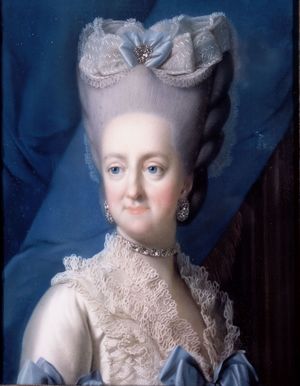 Formally, she had no official position, but she was recognized as the new leader de facto. The first period after the coup, she was openly present at the council meetings, but she was soon dissuaded from it, as this was not in accordance with royal law.[1] She corresponded with Frederick the Great, who was her supporter and who referred to her as the Regent of Denmark. Juliana was given the responsibility of the upbringing of the crown prince, Frederick VI. The crown prince greatly disliked her, because she attempted to form him to be in favor of her regency, and also because she tried to stop him from seeing his sister, who was his closest friend. In 1781, she decided on the advice of Frederick the Great that the crown prince should marry a Prussian princess.

On 30 June 1780, she gave refuge to the children of her brother, Duke Anthony Ulrich of Brunswick and the Russian regent Anna Leopoldovna, the siblings of the deposed Czar Ivan VI of Russia, when they were released from Russian captivity: upon an agreement with Catherine the Great, she received Catherine (1741–1807), Elizabeth (1743–1782), Peter (1745–1798) and Alexei (1746–1787), who were born in captivity, and let them live the rest of their lives in comfortable house arrest in Horsens; they were not used to social life, and kept a small "court" of 40/50 people, all Danish except for the priest. The siblings were kept under the responsibility of Juliana, and on the financial support of Catherine.

According to stipulations, the Crown prince should be admitted to the council as soon as he had his confirmation. To prevent his admittance, Juliana Maria postponed his confirmation until after his sixteenth birthday in 1784.[1] She also filled the council with her followers.

In 1784, the crown prince was declared of legal majority. She handed him a document with instructions of how he should rule. Juliana advised him to always rely on her advice, and she also had the king write a statement of advice to the crown prince in which he stated that until now, three people: the King, Prince Frederick and Juliana had been one, and in the future, four people must be one.[2]

The Crown prince, however, had no intention to allow Juliana and her son to continue their rule. He managed to make his insane father sign an order dismissing the supporters of Juliana Maria from the council and declaring that no royal order was henceforth legal unless co-signed by the Crown Prince.[1] During his first session with the council, he fired the government loyal to Juliana without warning and appointed his own officials, which ended all of the influence of the old regime in one blow, and the regency of Juliana and her son was thereby ended. At the following ball, however, the people involved acted as if nothing had happened, and gave the impression that no coup had taken place. She was taken with great surprise by the coup of 1784. In 1785, King Gustav III of Sweden suggested that she depose the crown prince regent, but she declined. Juliana lived the rest of her life discreetly at the court.